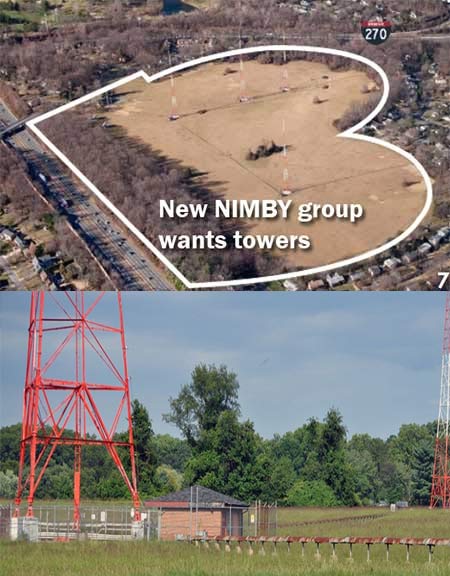 Industry observers believe that a number of radio station towers will be up for sale this year as broadcasters struggle with debt and declining revenues. The four towers above owned by Cumulus Media, along with the property, might fetch $75 to $100 million.

Update: June 24, 2020 — In a formal announcement on June 24, 2020, Cumulus confirmed that it has closed on the sale of its parcel of land in Bethesda to Toll Brothers.

Residents impacted by the proposed sale of a 75-acre Bethesda, Md. tract that is the home to Cumulus Media’s WMAL-AM Washington DC talk radio station, weren’t enamored with a presentation by developer Toll Brothers on Saturday to transform the area into a 328-home neighborhood.

Additional traffic was the chief concern of many residents.

In an article last year in Wireless Estimator, the proposed amount that Cumulus might be receiving was $75 million or more if the deal goes through following approval by planners.

Erected in the early 1940s, the four 400-foot towers and property were acquired by Cumulus when the broadcasting giant acquired Citadel Broadcasting Corp. for $2.5 billion in 2011.

WMAL has been on the air since 1925. A Cumulus spokesperson said that it could easily lease transmission facilities elsewhere if the property is sold.

Cumulus could use the land’s sale proceeds to pay down its enormous debt at a discount.

With approximately 450 stations in 90 markets, Cumulus is the nation’s second largest radio network.

Debt has been compounded by employee turnover and the company’s stock lost almost 90% of its value in 2015. Shares opened today at $0.44.

Cumulus is not the only company shedding its assets to capture cash. The nation’s largest radio network, iHeartMedia, formerly known as Clear Channel is also floating in a sea of debt.

In 2014, Vertical Bridge picked up iHeartMedia’s towers in a deal worth $400 million.

The last data obtained by Wireless Estimator indicated that Clear Channel had approximately 457 structures. Although they showed considerably more structures in their database, the total is increased considerably since many of their AM stations have multiple towers in the array.

Industry observers believe that there will be many more radio tower sales as broadcasters struggle with debt and changing technology that is leading to shrinking audiences and advertising revenues.