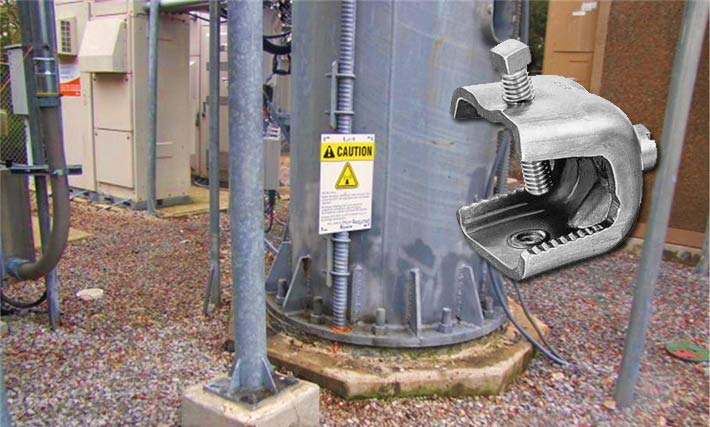 The tower tech is requesting in excess of $75,000 for injuries he received after being struck by an angle adapter that allegedly fell off of this 163-foot tall American Tower Corporation monopole in Tennessee.

Update: Feb. 3, 2016 – The angle adapter referenced yesterday in a lawsuit brought by a Virginia Beach, Va. Tower tech that is suing American Tower Corporation after he was struck by it after it allegedly fell from the structure, was a “cable safety boot attached to an angle adapter with bolt that wasn’t attached to [the] tower properly,” according to the injured tech, Craig Henson, in a Facebook comment posted from his hospital bed yesterday.

Craig Henson was recovering from surgery he underwent on Feb. 2, 2016 for a full disc replacement after suffering from injuries he received on Aug. 6, 2014 when the above angle adapter with a safety climb sleeve fell from the tower and struck him on the neck.

Henson said that he underwent cervical spinal surgery for a full disc replacement on Tuesday from the injury and is still recovering in the hospital. Wireless Estimator has reached out to Henson for additional comments regarding the incident.

At the time of the incident, according to a Facebook posting, Henson’s partner said Henson was “in the hospital because this fell on the back of his neck as I pulled cable from it (a safety climb cable sleeve),” providing the photograph at right.

Henson said on Facebook that he has not been able to work in the profession due to his injuries.

The Telecommunications Industry Registered Apprenticeship Program (TIRAP) has released a video investigating the reports of climbing cable systems that are incorrectly installed, presenting life-threatening situations to climbers who believe that tying off to them will ensure their safety.

Feb. 2, 2016 — A personal injury lawsuit is slowly working its way through the legal system after a Tennessee U.S. District court judge set a trial date for July 5, 2017 for a complaint that was lodged against American Tower Corporation by a tower tech employed by Tower Communication Expert, LLC,  who claimed he was struck by an angle adapter that broke loose from the tower and hit the back of his neck.

On Aug. 6, 2014, according to the lawsuit, Craig Henson was climbing the American Tower structure and when he was at approximately 30-feet above ground, the angle adapter, weighing approximately one and one-half pounds, fell from about 40-feet above him, striking him on the neck and causing significant physical and emotional injuries.

The lawsuit said that Henson had permission to be on the tower, and had used all proper safety equipment and precautions at the time of the incident.

The complaint states that:

As result of the defendants’ negligence, the lawsuit alleges, Henson had incurred substantial medical expenses for treatment of his injuries and will require future medical expenses.

Henson is demanding a judgment for an amount in excess of $75,000 plus costs, interest, and whatever additional relief the court will provide.