Although it’s an instructive and well-produced presentation of the important role safety climb systems play on telecommunications towers, it strikes an uncomfortable chord in identifying the number of incorrectly installed safety climbs that are in the industry and should be taken out of service.

“We’ve seen many incidents where proper use of this equipment has saved workers’ lives,” said moderator Jim Maddux, who was OSHA’s Director of the Directorate of Construction when the video was produced, but he also noted that, “We’ve also seen incidents where workers have died or been really seriously injured because the equipment wasn’t used properly.”

Some imagineered installations could result in manslaughter charges
In the 34-minute video, Kisting provides a startling look at some of the poorly installed systems, one with the top head assembly at the bottom, another tied off with rope to a step bolt, and others that are dangerously rerouted. 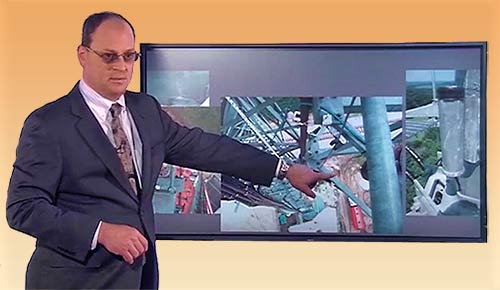 Scott Kisting provided a startling look at some of the dangerous safety climb systems that techs will use to ensure 100% fall protection.

Kisting walks viewers through some very specific examples of how shortcuts and a lack of attention to detail and safety regulations often leads to the potential of equipment not performing as it was designed to work.

Maddux, who has championed climber safety during his tenure with OSHA until this past December when he retired, said he’s troubled by some of the poor installations.

“For some of these situations, OSHA may not be your biggest problem,” Maddux said. “Scott has seen some problems that are so egregious, where the work was so poorly done, that the contractor can end up facing manslaughter charges at the state or local level.”

In the video, the industry experts emphasize the need for telecommunications executives, engineers, and contractors to ask the tough questions about the use and installation of safety climb systems, and not to be afraid to intervene when necessary.  The trio also urges workers to stop when concerned about safety conditions – and not continue until those conditions have been improved.

A main theme that is repeatedly stressed in the video is the use of SAUCE: Stop, Assess, Understand, Communicate, and Execute.  By applying this simple process to tower safety, workers will proactively discover any safety issues or concerns in order to keep themselves and their co-workers safe and sound. 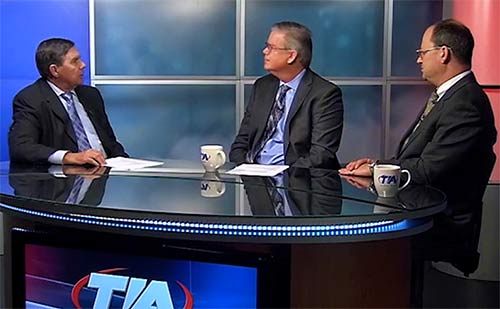 Jim Maddux, from left, Richard Cullum and Scott Kisting take viewers on a tour of some of the dangerous safety climb installations workers rely upon, and how they can be avoided by proper planning.

Crown Castle’s Cullum shares his personal story of how safety equipment saved his life as a young engineer working high above the earth. Cullum said his company’s policy requires contractors to tag out the system if there is anything that appears to be incorrectly installed or maintained, and they’ll immediately get it repaired or provide a new system.

The latest video continues the organization’s work to strengthen workplace safety, enhance workplace quality, and improve worker health and safety training.  It was produced by the Telecommunications Industry Association (TIA).

In 2014, a Virginia tower tech was injured when a safety climb cable sleeve and its attachment hardware fell from a tower and struck him on the neck. He underwent cervical spinal surgery yesterday.

A panel discussion about TIRAP’s apprenticeship program will be available during a live workshop webcast, a joint effort by the FCC and OSHA, on Feb. 10, 2016.