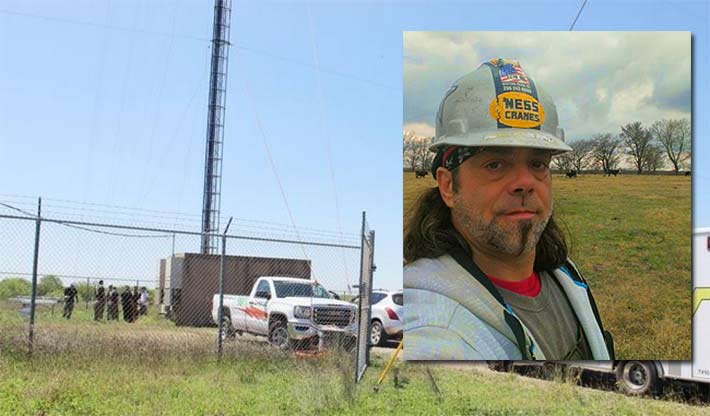 Troy White, 49, was seriously injured after a safety climb cable appeared to have pulled from its anchorage. He is still in critical condition at Corpus Christi Spohn Memorial Hospital . Photo: Alice Echo News Journal. Inset: Facebook

UPDATE: – April 21, 2016 – According to Troy White’s father, Mick Whitecotton, White is scheduled to undergo surgery on his left leg today. It was severely cut as the tower tech slid down a guy wire.

Whitecotton said White was still in the trauma center intubated with a brace on his back. Nurses were able to allow him to stand for a couple of moments, Whitecotton said, appreciative that his son’s recovery seems to be moving forward.

A tower technician is in intensive care with serious injuries that he sustained after a failed safety climb cable whipped him off the structure and then lashed him back to the guyed tower in Texas last Thursday, according to crew members who were working on an AT&T Mobility Spectrum LLC-owned tower.

Troy White, age 49, was airlifted at approximately 2 p.m. to Corpus Christi Spohn Memorial Hospital after he fell from the 493-foot guyed tower on County Rd 170 near County Rd 120 in Jim Wells County.

Site construction manager Joseph Rosebrough, who has been climbing for four years, said two men were working with White when he fell, Tyler Chavarria and John Vinson.

According to White’s father, Mick Whitecotton, who spoke with the three men in the crew, his son was ascending the tower when the safety climb cable he was attached to broke loose from the system’s top anchorage and started flailing downwards, knocking him off of the tower.

White then came in contact with a guy wire and slid down it, severely burning and cutting into his left thigh, Whitecotton informed Wireless Estimator.

But at some point the cable unwrapped from the guy wire and threw his son back into the tower, “causing a punctured lung, six broken ribs, a serious hole in his arm and breaking his back in three places,” according to Whitecotton.

It has been estimated that the distance that White fell, from the time he exited and then smashed back into the tower, was 100 feet.

“He’s at the trauma center and is in bad shape,” said Whitecotton, lauding the two men, Rosebrough and Vinson,  who helped to save his son’s life by lowering him to the ground as emergency services began arriving.

Saves a co-worker’s life and is fired
Rosebrough said he was inside an equipment shelter when he heard the clanging of the flogging cable wire striking the tower, and ran outside to see what was happening. He saw White up against the face of the tower and immediately called emergency services.

“John and I grabbed our rescue gear and had him down in about 11 minutes, just as the emergency personnel were arriving,” said Rosebrough.  He said that Tyler Chavarria was climbing above White and when he was at about the 400-foot level, the cable cut lose, braising his face. Chavarria was treated at the scene.

White and his co-workers are employed by SkyTel Wireless LLC of Frisco, Tex. The company was contacted numerous times by Wireless Estimator for additional information, but did not respond.

SkyTel was established in August of 2015.

However, his employer wasn’t as grateful. Rosebrough said that the company’s owner, Rich Rabah, notified him, Vinson, Chavarria and another project manager that they were being terminated today.

He said that OSHA had contacted him and that he was preserving the safety equipment to “ensure a proper chain of custody.”

Rosebrough said that safety has always been his priority on any job and the day started out using Wireless Estimator’s Job Hazard Analysis form.

An AT&T spokesperson said in a statement, “Our thoughts are with the contractor who was injured. We are working with our vendor on an investigation.”

Whitecotton owns Pilgrim Communications of Auburn, Wash. He said that Troy was considering moving from his residence in Seattle if the Texas position proved to be fruitful.

Manufacturers will meet tomorrow to discuss safety climbs
In February, the Telecommunications Industry Registered Apprenticeship Program (TIRAP) released a video on “Safety Climb Systems,” identifying the important role safety climb systems play on telecommunications towers, while emphasizing the number of incorrectly installed safety climbs that are in the industry and should be taken out of service.

Safety climb equipment manufacturers will be meeting in Atlanta, Ga. tomorrow to discuss various issues that have arisen within the industry.

It’s likely that White’s incident will be their first topic and will further fuel the immediate need to address failed systems that are providing a false sense of security for the nation’s tower technicians.