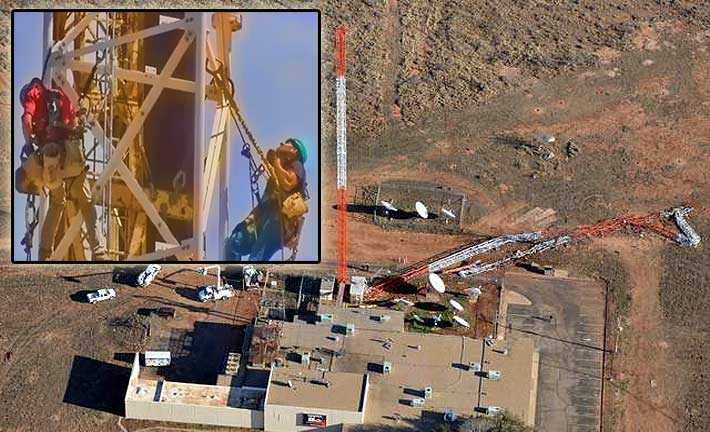 As tower erectors were setting the first section, the NTSB came out with their findings regarding the collapse after an airplane struck it.

After a tower crew on Monday set the base section of a new 815’ guyed tower for KCBD after a single engine plane crashed into and collapsed the former Lubbock Tex. structure on February 4, 2015, the National Transportation Safety Board (NTSB) coincidentally released the findings of their investigation.

The NTSB’s factual report said Doctor Mike Rice’s plane’s propeller nose had marks on in that looked like they came from hitting one of the tower’s guy wires.

The report said: “A propeller blade tip separated and exhibited scoring consistent with contact with a metal wire. The propeller nose cone displayed striations consistent with a large gauge wire similar to the downed guy wire.”

However, one guy wire was extended toward the main wreckage, according to the report, and remained connected to its base on the ground. The end of the guy wire was found next to the fuselage and exhibited signatures of tension overload.

A witness located in a parking lot next to the TV tower stated that he heard the airplane overhead and it sounded like the airplane’s engine was operating. He looked up and saw a large flash of light that filled his field of view. He observed the TV tower’s red beacon lights disappear and then the tower collapsed on top of itself. He described the weather as cold, very low clouds, and no precipitation.

Surveillance videos from two different locations showed the airplane in a steep descent headed toward the tower. The airplane passed behind the tower and then multiple large flashes of light were observed.

The report did not provide a probable cause for the crash, nothing that “A final Forensic toxicology fatal accident report … was negative for tested drugs.”

The report also ruled out engine problems saying the engine showed no evidence of damage prior to the crash.