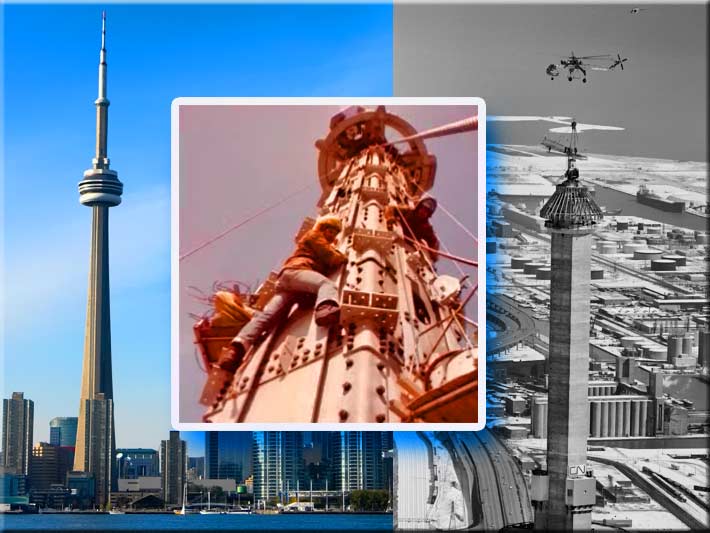 Although fall protection procedures and equipment were limited, there were no climber fatalities during the tower’s construction. One ground worker died after a sheet of plywood fell from the tower and broke his neck.

Canada celebrated Toronto’s iconic 1,815-foot CN Tower’s 40th birthday yesterday as many of the iron workers who built it, lots of them now in their seventies and eighties, possibly celebrated that they weren’t killed during construction due to what appeared to be limited use of personal fall protection.

But many of them photographed without any harness on didn’t appear to be concerned about the dangers while building  what would then be the world’s tallest broadcast tower that began in 1973, especially on payday.

Iron workers were being paid $8 per hour, Canadian, at a time when their dollar was on par with U.S. currency, equivalent to approximately $42 today.

A weekly 40-hour paycheck would have been $1,680 in today’s wages. Plus, adding guaranteed overtime on the construction project that continued 24 hours a day, a worker could easily see his paycheck increase to $2,400 or more.

So, if you were topping out the CN Tower that took 40 months to build, you were quite proud of your accomplishment as well as your burgeoning bank account.

If an iron worker did wear a harness, they were tied off at the back and the harness had no leg straps. If they fell, the worker would most likely fall out of the harness.

However, no workers did. The only fatality, according to the project’s purchasing agent in a YouTube video, was a worker on the ground who received a broken neck when a sheet of plywood fell off of the structure during construction.

Iron workers save the day and lives
Construction plans called for the antenna to be raised by crane, but while the tower was being built the Sikorsky S-64 Skycrane helicopter became available when the U.S. Army sold them off to civilian operators.

The helicopter, named “Olga”, was first used to remove the crane, but that became a harrowing event.

In 1974, the Sikorsky could not break bolts loose from the tower’s peak as it attempted to dismantle a crane at the top. With less than an hour’s worth of fuel left for the planned 12-minute job, the chopper needed to be detached immediately.

Iron workers quickly climbed up the tower and burned off support bolts that had seized and caused the problem. The helicopter and crane were finally released from the tower and made a safe landing nearby, with about 14 minutes of fuel left in the tank.

The Sikorsky flew the antenna up in 36 sections, taking only three and one-half weeks instead of the planned six months. The tower was topped off on April 2, 1975.

Since then, it became the 3rd tallest tower in the world and remains the tallest free-standing structure in the Western Hemisphere. 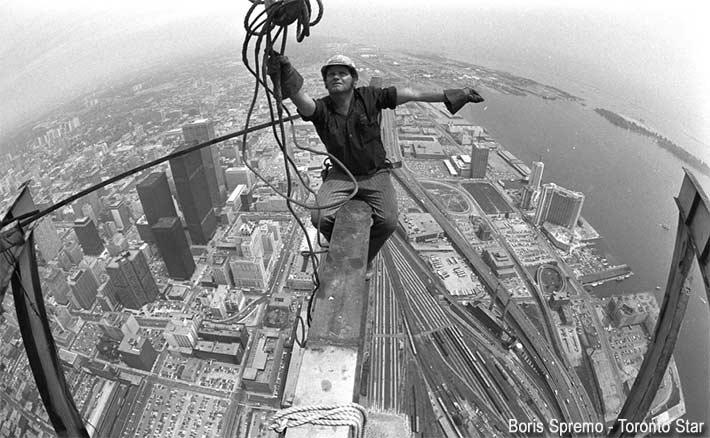