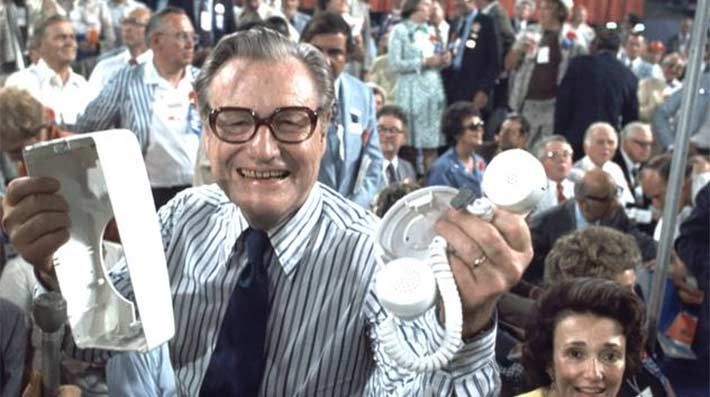 Vice President Nelson Rockefeller couldn’t take a selfie with the sole phone his delegation had or even dial out on it after a Utah delegate trashed it.

All of the major carriers are boosting their networks ahead of the Republican national convention to be held in Cleveland, Ohio, July 18-21, and the Democratic convention in Philadelphia, Pa. July 25-28 with increased DAS systems, better backhaul, additional Cells on Wheels and other measures to ensure coverage for the events.

But no matter how spotty the coverage is in the Quicken Loans Arena for the Republican New York delegation, only a complete meltdown of all wireless coverage would be comparable to what happened 40 years ago at the Kemper Arena in Kansas City, Mo.

Prior to the convention, President Gerald Ford had won more primary delegates than Ronald Reagan, as well as a plurality in popular vote. However, Ford did not have enough to secure the nomination, and as the convention opened both candidates were seen as having a chance to win.

Shoving and shouting matches between Ford’s forces and Reagan’s supporters were not uncommon, and the vice president of the United States, Nelson Rockefeller, was involved in a ruckus on the floor of the convention that ended up with New York’s delegation losing command center communications during the 1976 GOP convention.

The New York delegation led by Rockefeller were all supporting Ford and a Utah delegate reportedly had a Regan sign taken by a member of the delegation.

He became incensed and yanked the delegation’s phone off the stand and trashed it on the convention floor.

That phone was the lifeline to Rockefeller’s command headquarters and all communications ceased until a new phone could be located and hooked up by a telephone company repairman.

With literally no room to move in the aisles, tight security and other problems, it took some time to get the new phone installed, but not as long as it would today because the Rockefeller aide didn’t have to be put on hold by a call center in India for a half hour.

Rockefeller later said in this recording of an interview he had while waiting for the new phone that he was the individual that had grabbed the Regan sign from the delegate and he labeled the incident as a small donnybrook, not a major political combat.