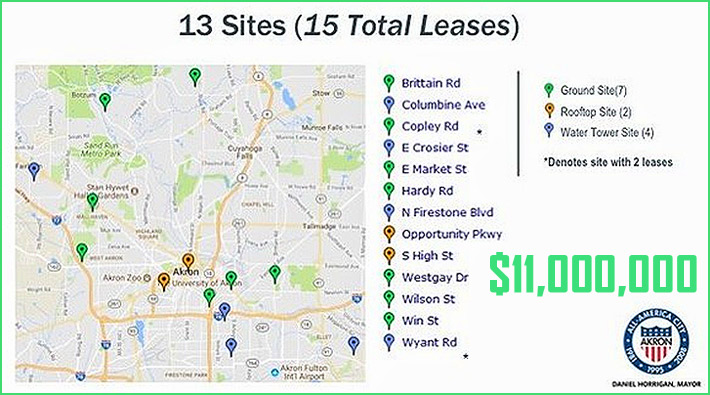 The city of Akron, Ohio has completed the sale of 15 lease agreements to Pittsburg, Pa.-based EIP Communications and will receive $11 million.  City leaders were expected to move forward with the deal since they had already spent about $6 million that they had earmarked from the sale when they passed their 2017 budget nearly a year ago.

The city sold the 15 lease agreements it had with telecommunications companies that use space on 13 publicly owned properties: a parking deck on Opportunity Parkway; the rooftop of the downtown CitiCenter building; the sides of four water towers, two of which have two leases; and seven city parks and open spaces.

EIP’s bid was the highest of 11 submissions the city received for the 50-year lease deal. The 15 agreements expire between 2023 and 2028. EIP has approximately 12 employees.

The additional $5 million the city received from the sale will go into a “rainy day fund” that ideally should be $27 million and is only at $5.2 million. By increasing it to $10 million, bond rating agencies might look at the Akron’s financial condition more favorably, or at least not downgrade it which would raise the city’s borrowing costs.