American Tower Corporation (ATC) will be closing its office in Boca Raton, Fla. at 750 Park of Commerce Blvd., and laying off many of their 56 employees, according to a Florida worker adjustment and retraining notice dated March 1. 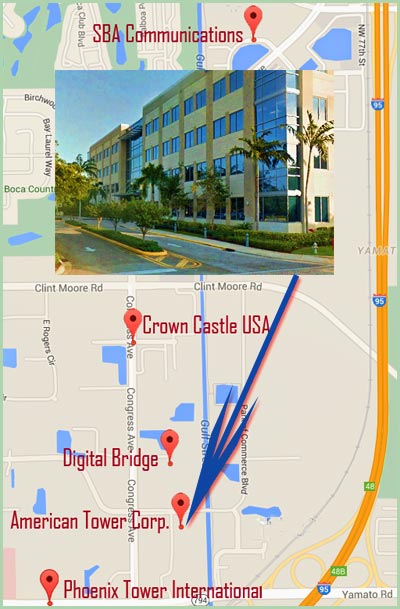 Terminations are scheduled to begin on May 1.

The office is located within a stone’s throw of Digital Bridge’s headquarters and near SBA Communications’ corporate office. Crown Castle and Phoenix Tower International also have offices just blocks away.

The Boca Raton locations have been a favorite of salespeople who frequently schedule multiple meetings during one trip.

“In order to provide a consistent experience for both customers and property owners, American Tower is bringing together employees who work on such matters. As a result, over the next year, the company will transition employee roles and responsibilities from Boca Raton to our offices in Cary, NC and Woburn, MA. Employees who do not relocate to Cary or Woburn will receive a severance package,” Matt Peterson, Vice President, Communications, said in a statement provided to Wireless Estimator.

In 1996, ATC owned approximately 400 towers located in 24 states and had its corporate office in Webster, Tex.

Today, the company has a global portfolio of 147,000 sites, with approximately 40,000 in the U.S. ATC has approximately 3,300 employees, according to Forbes.

Florida has become a popular location for the country’s top tower companies, as detailed here.