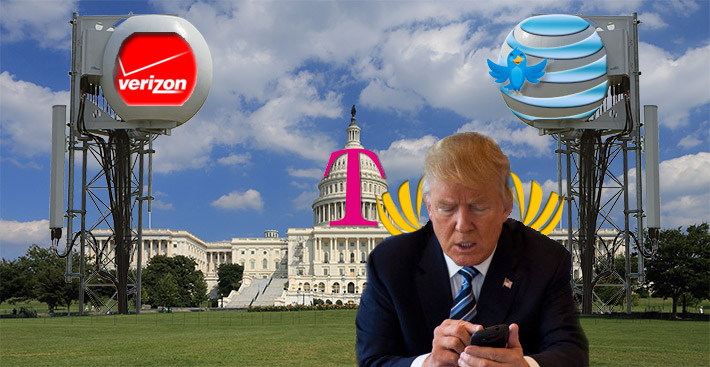 The nation’s wireless carriers are ready for President-elect Donald Trump’s inauguration on Jan. 20 in Washington D. C. with increased network capacity with AT&T providing what might be the best coverage in the District – or at least it appears that way as the nation’s second largest carrier promotes its innovative and largest temporary network it has ever provided. 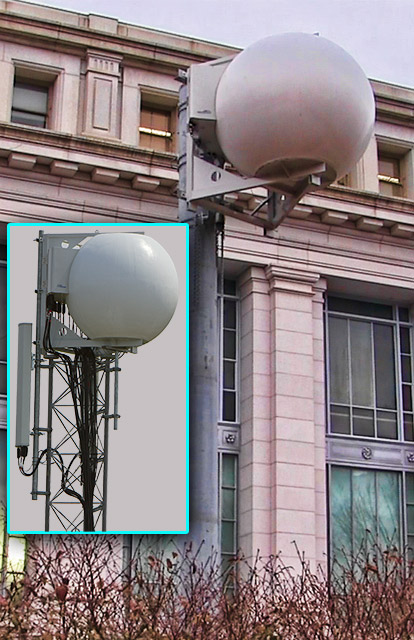 Verizon is rolling out their MatSing Ball technology antennas for the inauguration. AT&T (inset) has been using them since 2014.

Two new technical additions not seen during President Barack Obama’s 2013 inauguration that will be placed along the National Mall are AT&T’s ‘giant eyeball’ and its ‘drum set antenna’.

The drum set antenna consists of two spherical balls with their tops and bottoms cut off— like drums. These send out RF signals in various directions based on how the network engineers attach transmitting elements to each antenna, allowing technicians to send precise cellular signals wherever they need to go.

AT&T will be providing two ‘Super Cow’ drum set antennas in the District that are able to offer 30 times the capacity of a traditional, single-beam antenna – not only an AT&T record, but an industry one as well, the company said in a statement.

AT&T is also plucking out a number of giant eyeballs from their portfolio of tools to boost network capacity in D.C. by 400%.

The giant eyeball antenna (also known as the Luneburg Lens Antenna), also allows their engineers to distribute data traffic based on the data consumption of the crowd.

The shape allows 18 beams of RF to better cover an area. AT&T said, the giant eyeball antenna was deployed for the first time in D.C. at this year’s Cherry Blossom Festival as a test run for the presidential inauguration and carried more than 2.1 TB of mobile data – equal to more than 6 million Cherry Blossom selfies.

It is anticipated that approximately one million people will be attending the inauguration and will take advantage of SnapChat, Instagram, Facebook Live and other social media on their smart phone.

Although approximately 1.8 million people attended President Obama’s inauguration in 2009, and 1 million in 2013 for his swearing-in ceremony, putting attendance at about 55 percent of his first crowd, AT&T said that data usage increased by more than 16 times during the second event.

For President Obama’s first inauguration in 2009, only 10 percent of the U.S. population used a smartphone.  Today, 88 percent of Americans own smartphones, according to Verizon Wireless.

Bandwidth flows by any other name doesn’t sell as sweet
Along with AT&T, wireless carriers Verizon, Sprint and T-Mobile have been preparing to have excellent capacity for the inauguration for a number of years. 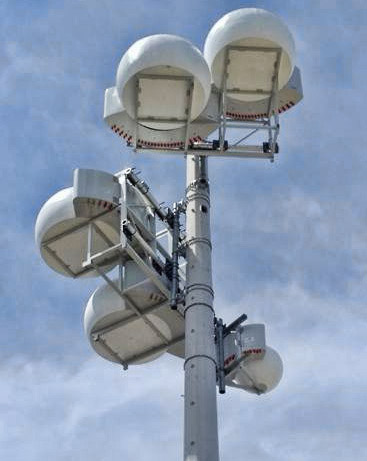 Verizon said it will be using temporary cell sites that use remote electrical tilt and MatSing Ball technology.

It’s the same multi-beam antenna system and manufacturer that AT&T is using. However, AT&T’s ‘giant eyeball’ marketing tweaking seems to get more press.

Verizon’s Chief Network Officer Nicola Palmer also takes some promotional liberties in a press release today, by inferring that the MatSing technological advancements are being unveiled solely by Verizon.

“Our customers have always had the leading technologies first, providing them with the best experience,” said Palmer in reference to their debuting crowd slicing coverage.

However, AT&T started using the MatSing antenna system in 2014 at major events.

The number of people expected to be attending President-elect Trump’s swearing-in has been pegged as low as 800,000 by some media outlets.

But their estimates could be as accurate as their pre-election polls.

The U.S. Park Police used to provide crowd size estimates, but in 1995, Congress ordered the agency to stop providing official estimates after their counts appeared to be questionable.

Today, technology companies can provide unbiased estimates within minutes through the use of algorithms and crowd density images, although it is unlikely that they can identify how many A-list entertainers are in the viewing audience.