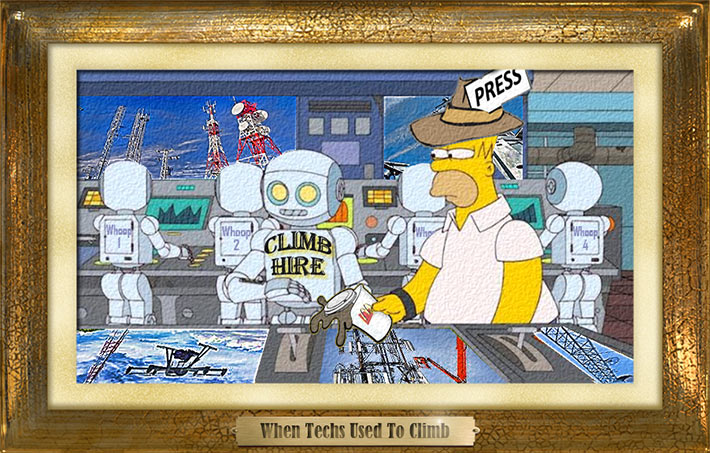 A study that has been kicking around since it was published by researchers at Oxford University in 2013, has gained a second life in the last few months after two online entrepreneurs made it easy to find out how susceptible 702 occupations were to being replaced by machines.

The university report by Carl Benedikt Frey and Michael A. Osborne was created by using a Gaussian process classifier to look at the detailed occupations, and according to their estimates, approximately 47 percent of US employment is at risk.

The report rendered a repulsive outlook for workers installing “radio, cellular and tower equipment,” identifying that there is a 93% probability of automation.

WILL ROBOTS TAKE MY JOB? shows that crane operators were slightly better off, but still came in at 90% where a quarter of the jobs analyzed also ended up.

The report said that robots are still unable to match the depth and breadth of human perception, and in what is oftentimes a rat’s nest of comingled transmission lines and carrier-specific equipment, mounts and other infrastructure, tower techs will win the race against artificial intelligence algorithms – at least for the foreseeable future.

Anxious to know when this reporter could expect to receive a pink slip from a robot fresh off the communications conveyer belt, it was comforting to know that reporters and correspondents were at a heel-clicking 11%.

Journalists shouldn’t attempt to check the efficacy of the study, unless they find getting the square root of a matrix is as easy as remembering where the caps lock key on their computer is located.

However, they can question their methodology of relying heavily upon data provided by the Department of Labor’s (DoL) Bureau of Labor Statistics (BLS).

As an example, tower technicians are listed under SOC Code 49-2021.00, in O∗NET, an online service developed for the DoL.

The study said this provides them with the key features of an occupation as a standardized and measurable set of variables, “but also provides open-ended descriptions of specific tasks to each occupation.”

Unfortunately, the tasks that are required are so sophomoric that it would be difficult to gauge the exacting knowledge bases required for a tower technician, no less a robot.

Had these tasks been the only requirements for Telecommunications Tower Technicians l and ll certifications, the National Wireless Safety Alliance could have been off and running within weeks.

Although it was reported last month that AT&T’s tower-centric drone software could sunset a number of head counts for tower mapping and other work, Art Pregler, director of AT&T’s National Mobility Systems said, “Our goal is not to take tower climbers off the tower, but to add new resources to their toolkit and help provide an even more safer environment for them. In the future, drones may be able to get to the point where they can fly and clamp on to the tower to do some very minor tasks, but I don’t see drones ever – or at least not in the foreseeable future – replacing those types of activities that a tower climber performs.”

One major drone services provider said last year, “We will take tower climbers off the towers. That’s our goal and we expect it to fully occur within five years. We are also looking at remote robots that can climb towers. They can use the safety climb as well as the pegs to get up towers.”

Pregler believes that is not conceivable in the next four years.