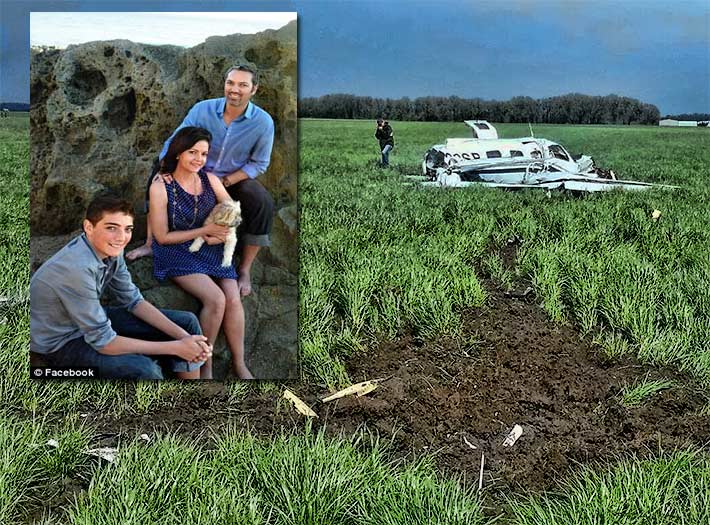 John Zitting and his wife, Karen Blackmore Zitting, were flying to Oregon with their son, John Brandan, when the crash occurred just north of Eugene.

A well-known and respected California contractor and his family were killed Friday while on a college scouting trip when their plane crashed in a rural field in Oregon.

His father was president of TruNorthe LLC, a wireless construction management company in Simi Valley that he founded about seven years ago.

John Brendan was the couple’s only child.

The plane crashed just before 11 a.m. near an airport about two miles north of Harrisburg, which is just north of Eugene, according to Linn County sheriff’s officials. Authorities said witnesses reported seeing the plane flying low before turning and crashing into a grass field.

The pilot, according to a sheriff’s office statement, said the pilot that also died in the crash was Mark Gregory Aletky, 67, of Acton, Calif. The press release stated he was a certified pilot who had been hired by the plane’s owner, Utah-based Park City Aviation LLC, for Friday’s flight.

However, in a news report from Oregon Live, TruNorthe Director of Human Resources Tara Harris said Zitting had recently been traveling a lot in an effort to grow TruNorthe, and was excited to have bought a plane and had hired Aletky a professional pilot.

Federal Aviation Administration officials are investigating, but haven’t determined a cause of the 1984 Piper PA-46-310P’s crash.

On May 12, 2008, the owners of safety equipment provider Elk River, Phillip and Pat Clemmons, were killed when their small plane Phillip was piloting crashed in Ohio.

And on October 21, 2009, the industry mourned the death of Randy Hargenrader, president and founder of Hark Systems, a leading wireless industry supplier of alarm monitoring equipment, who died along with three other friends when their small aircraft crashed in South Carolina.