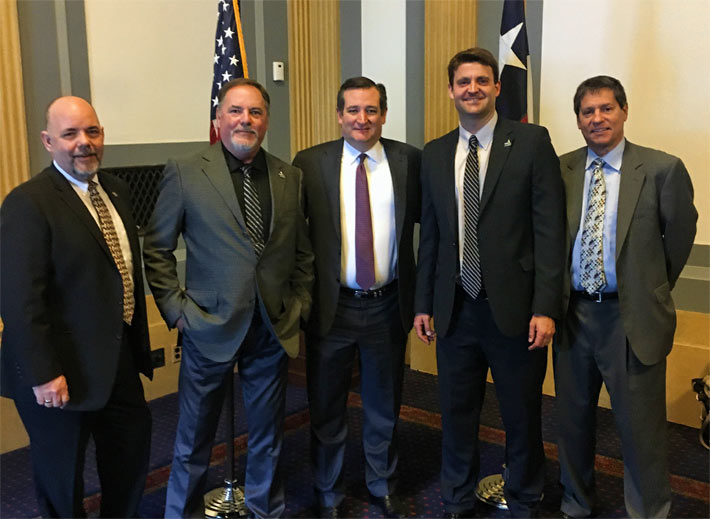 Pictured with Senator Ted Cruz (Center) who serves on the Subcommittee on Communications, Technology, Innovation and the Internet, are: (LtoR) Jim Tracy, John Paul Jones, Todd Schlekeway and Jim Goldwater

Timed to coincide with Federal Communications Commission (FCC) Chairman Ajit Pai’s declaration of April 2017 as “Infrastructure Month”,  executives of the National Association of Tower Erectors were in Washington, D.C. last week for a series of legislative and regulatory meetings. 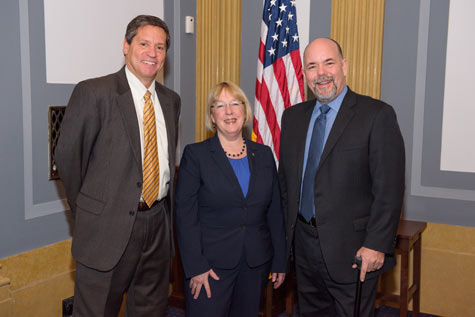 Association’s involvement in FirstNet, repack emphasized
Throughout the week, NATE officials highlighted the prominent role the Association’s member companies will be playing in the deployment of the FirstNet Public Safety Broadband Network, the post-Incentive Auction Broadcast “Repack” work on tall towers and the future buildout of 5G networks and related technologies. During the meetings, NATE also addressed the Association’s leadership role integrating Unmanned Aerial Systems (UAS) into the communications tower industry, NATE’s efforts to seek changes to the onerous tower marking provisions contained in Section 2110 of the FAA Extension, Safety and Security Act of 2016 and promote the Association’s efforts to streamline small cell deployment in the United States.

During all of the meetings, NATE emphasized workforce safety and raised awareness on the valuable resources, standards and materials the Association has available to ensure that the coming spike in work is conducted safely and in a quality manner.

“As I reflect on NATE’s recent trip to D.C., it is evident to me that the nation’s capital needs the influence of NATE and its membership. The real life experiences of our members lend credibility to wireless and broadcast policy. Our conspicuous presence in the wireless ecosystem is quite secure,” stated Jim Tracy, NATE Chairman and CEO of Legacy in Burley, Washington. “Rest assured, NATE will continue to relentlessly build relationships in Washington, D.C. in order to ensure that policies and regulations are taking into account the prosperity, safety and welfare of our member companies who are so vital to advancing the networks and connectivity of today and tomorrow,” added Tracy.

The following is a comprehensive listing of NATE’s Legislative & Regulatory activity conducted throughout the week: