President Donald Trump offered backing for emerging technologies such as next-generation wireless and unmanned aerial vehicles in a meeting yesterday with the heads of telecom giants AT&T, Sprint, Verizon and T-Mobile, and drone companies such as Trumbull Unmanned as well as venture capitalists and health care providers.

Wireless makes some strange bedfellows
During the meetings in the East Wing, Trump seemed to have softened his pre-election concern about an example he gave regarding “the power structure I’m fighting,” in reference to AT&T acquiring Time Warner for $108 billion. 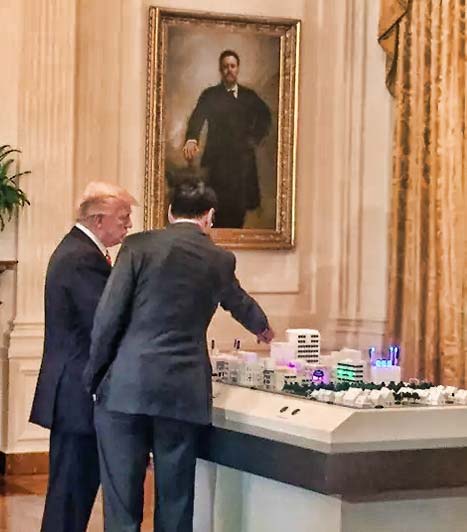 AT&T CEO Randall Stephenson described the benefits of small cell technology to President Trump with a model city. He emphasized that small cells would cut construction costs by replacing unnecessary fiber, a comment that immediately impressed the life-long builder.

He stated at one rally it was “a deal we will not approve in my administration because it’s too much concentration of power in the hands of too few.”

It has been reported that Trump’s administration has been reviewing it without direct pressure from the President, and it was clear at the meeting that Trump is somewhat enamored with AT&T’s evolution.

With AT&T CEO Randall Stephenson sitting to his right, Trump said the company was “like two companies. You started, then it was made different by government and now here you are again.”

In response to Stephenson’s comments that the industry has been stymied in building out 5G networks because of permitting difficulties, Trump responded with a pledge to send a “strong letter” to state and federal regulators.

Trump promised to cut down on too many years of excessive government regulations.

“We have had regulation that’s been so bad, so out of line that it’s really hurt our country,” he said.

Stephenson later provided Trump a demonstration (at 25:30 in the below video) on the advantages of 5G using a small city model complete with lights. Trump paid rapt attention to the AT&T chief’s presentation and asked detailed questions.

Trump questioned whether there would be construction savings using small cells and was informed by Stephenson that it would be a huge saving, especially since “you don’t have to deploy all this fiber.”

“We are at a place where if we get this right, we will probably lead the world for another era,” said Stephenson during his opening remarks.

The invitation letter from Claure who signed it as President and CEO of Sprint Corp said, “Hillary has the steadiness, experience, and temperament to lead our country. Donald Trump is just too risky.”

But Claure, who was representing Sprint and its parent company, SoftBank,  was warmly welcomed by Trump yesterday, with the President applauding SoftBank’s $50 billion pledge to invest in America.

Claure demonstrated a shoebox-sized small cell antenna and informed Trump that the antennas can be installed in an hour, but it sometimes takes up to two years to get a permit.

He said that there will be an investment in 5G of $275 billion dollars and it will create three million new jobs, and small cells are better.

Promoting small cells for 5G, Claure said, “4G is for a normal tower that looks quite ugly.”

Although former President Barack Obama will likely be acknowledged as the most tech-savvy president in history, taking federal agencies out of the digital dark ages, Trump is credited with knowing more about constructing the infrastructure to run software-centric broadband.

In 1986, he watched the installation of a rooftop mounting frame, most likely never envisioning how technology would change broadband installations over the years.

STEPHENSON AND CLAURE’S DEMONSTRATIONS ARE AT 25:30