In order for Americans to experience a total solar eclipse of the sun on Aug. 21 and record it on their cell phones, carriers rolled out dozens of Cell on Wheels and Cell on Light Trucks for the two-minute event, but can’t seem to provide Puerto Rico with any more than 14 COWs and COLTs, according to FCC data, as the island still suffers with 55.2% of its cell sites out of service as of Oct. 31. 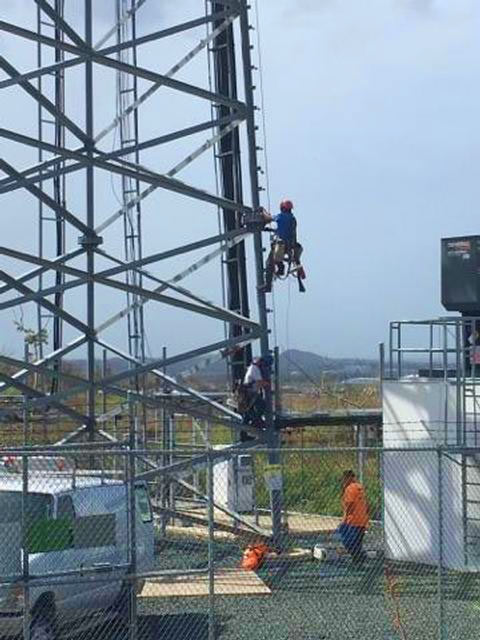 Tower techs work on a T-Mobile Puerto Rico cell site. The carrier said it has restored service to nearly 240 sites.

In a Hurricane Maria update last week, AT&T said it had temporary cell sites in 13 cities. To serve its customers during the eclipse it had 10.

Either the temporary cell site count per county is voluntary and other carriers have not contributed to the FCC’s daily reporting, or AT&T is the only provider with COWs and COLTs.

However, according to a T-Mobile release on Monday, the carrier deployed COWs and COLTs that had been sent on multiple barges. They also said service has been restored to nearly 240 sites.

A request to the FCC for information regarding how the agency compiles its COLT and COW data was not returned.