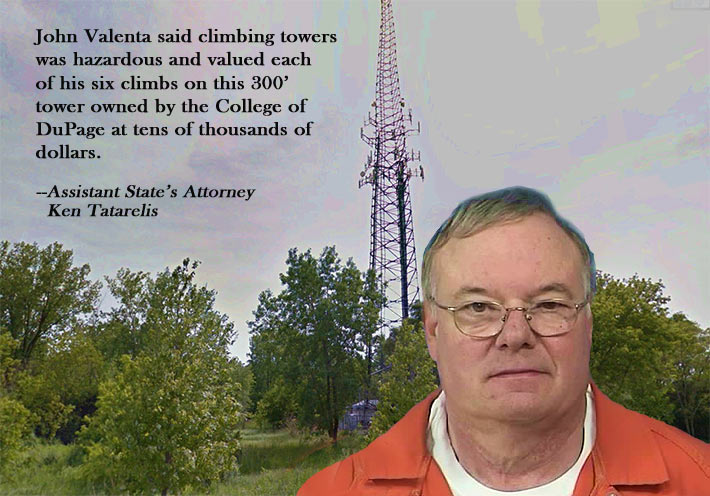 John Valenta traded in his 30-plus year career as a radio engineer at DuPage College for an aviation orange prison jumpsuit. He felt he was due an extra $400,000 in compensation because he had to climb the college station’s tower five or six times.

A former radio engineer has been sentenced to eight years in prison for stealing approximately $400,000 from the College of DuPage Illinois-owned FM station WDCB.

John Valenta, 68, of Wheaton, appeared in court Friday, where DuPage County Judge Liam Brennan handed down the sentence. Valenta pleaded guilty to theft over $100,000 as part of a plea agreement on Feb. 28.

The sentencing was the result of a 13-month investigation conducted by the State’s Attorney’s Office and College of DuPage.

Valenta, a 30-plus-year employee of the college was also ordered to make restitution in the amount of $399,000.

Valenta was charged in 2015 after an internal audit conducted at the station uncovered an “abnormally large number of costly invoices for radio station engineering services” from Broadcast Technologies, a company Valenta owned, according to a news release from the State’s Attorney’s Office.

A former station manager, Scott Wager, who had supervised Valenta and approved most of the invoices between 2001 and 2013, was unaware that Valenta was the man behind Broadcast Technologies, Assistant State’s Attorney Ken Tatarelis said.

When Daniel Bindert became manager of WDCB-FM 90.9 in 2013, he recognized the irregularities in invoicing.

On Jan. 5, 2014, the prosecutor said, Bindert and Valenta had a phone conversation in which Valenta said he was at the station’s transmitter building doing work. Bindert went to the building, and although there was a foot of snow, Bindert could not see signs of footprints or car tracks.

Valenta later appeared at the station and said he had been working on the transmitter, though Bindert didn’t see any snow on him, the prosecutor said.

“The defendant (Valenta) said that probably 10 percent of the invoices that he billed the College of DuPage for were legitimate,” according to the State’s Attorney’s Office.

Valenta said that he submitted many of the fictitious invoices to compensate for the hazard of having to climb the radio station’s tower five or six times.

Valenta told prosecutors many of the invoices he submitted were inflated to cover personal and professional issues, the labor and merchandise listed on the invoices, totaling $200,829.77, was never delivered to the station.

“Mr. Valenta’s greed finally got the better of him,” DuPage County State’s Attorney Robert Berlin said in the release. “He was no longer satisfied with a good paying job he held for nearly three decades and decided that he would simply steal from not only the College of DuPage but from DuPage County taxpayers to fatten his wallet.”

Until the investigation of the DuPage fraudulent invoicing the college wasn’t aware that from 2009 to 2010, Elmhurst College paid Valenta’s company more than $37,000 for work and equipment and college authorities began looking into Valenta’s billing there when he invoiced for turntable-related studio equipment that was never installed.

Valenta pleaded guilty to theft in May 2012 and was sentenced to probation.

Valenta is still listed in the FCC’s database as the contact for the College of Dupage tower.