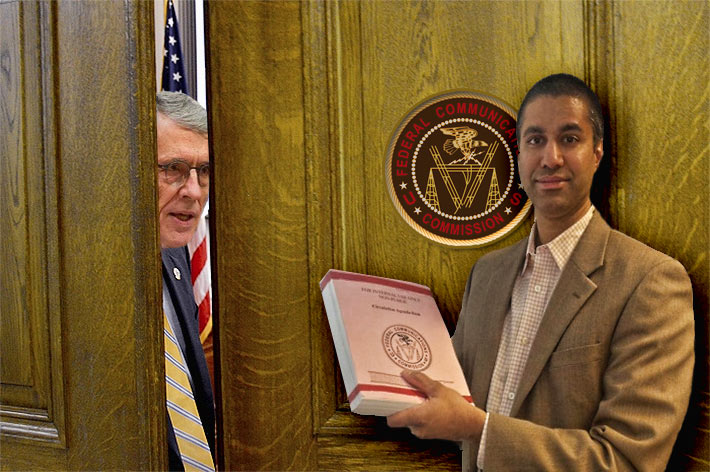 FCC Chairman Ajit Pai said he is going to pilot test a program of releasing documents to the public in advance of an open meeting  rather than keeping them behind closed doors until after the Commission votes.

FCC Chairman Ajit Pai today announced a pilot program designed to dramatically increase the transparency of Commission rulemakings. For the first time, the Chairman is releasing to the public the full text of documents he circulated to his fellow Commissioners for a vote at the FCC’s next Open Meeting on Feb. 23.

Traditionally, these documents, and the draft proposals contained therein, are circulated internally three weeks before an Open Meeting, but are not made available to the public until after the final vote.

“Today, we begin the process of making the FCC more open and transparent,” said Chairman Pai at a public event today at the FCC.

“We believe that releasing these documents—rather than keeping them behind closed doors until after our vote—will increase the public’s understanding of our decision-making process, and result in final rules that better serve the public interest.”

Under the FCC’s current process, the Chairman circulates proposed rules to his fellow Commissioners at least three weeks prior to consideration of those items at the agency’s monthly public meeting.

At the same time, the Commission announces its tentative agenda for the next meeting, followed by a formal agenda—a “Sunshine Notice”—one week prior.

If successful, Chairman Pai’s pilot project will become a new part of this process going forward. In the pilot, the Chairman is releasing the full text of two documents that will be listed on today’s tentative agenda for the February Open Meeting.

The first is a Notice of Proposed Rulemaking, or NPRM, that solicits public input on allowing television stations to use ATSC 3.0, the next-generation broadcast standard.

The second is a Report and Order that gives AM radio broadcasters more flexibility in siting their FM translators.

Releasing both an NPRM and a Report and Order will provide the Commission with test cases involving what is essentially the beginning and the end of a conversation that an administrative agency has with the American public about regulation.

As this is only a pilot project, the Chairman is not releasing the text of all the items on the meeting, but he hopes to do so in the future if the pilot is successful.

“I applaud Chairman Pai for taking the initiative to implement this important change to our procedures and I can’t wait to see all of the other process changes he has planned in the coming months. He has been a great partner in this effort,” O’Rielly said.

“Today is a major step forward for the agency in terms of transparency and accountability. While it may make our jobs a bit more challenging, it is the right thing to do for the American people, the practitioners before the Commission and the professional press who report on Commission activities.”

TENTATIVE AGENDA FOR FEBRUARY OPEN MEETING
The  following items are tentatively on the agenda for the February Open Commission Meeting scheduled for Thursday, February 23, 2017:

Universal Service Reform – Mobility Fund; Connect America Fund – The Commission will consider a Report and Order adopting rules to provide ongoing support targeted to preserve and advance high-speed mobile broadband and voice service in high-cost areas that the marketplace does not otherwise serve. (WT Docket No. 10-208, WC Docket No. 10-90)

Connect America Fund, ETC Annual Reports and Certifications – The Commission will consider a Report and Order and Order on Reconsideration that (1) resolves a number of issues raised in the Phase II Auction Order FNPRM, including the adoption of weights to compare bids among service performance and latency tiers, and (2) considers several petitions for reconsideration for decisions made in the Phase II Auction Order. (WC Docket Nos. 10-90, 14-58)

Authorizing Permissive Use of the ‘Next Generation’ Broadcast Television Standard – The Commission will consider a Notice of Proposed Rulemaking that proposes to let television broadcasters use the “Next Generation” broadcast television transmission standard associated with recent work of the Advanced Television Systems Committee (ATSC 3.0) on a voluntary, market-driven basis. (GN Docket No. 16-142)

Revitalization of the AM Radio Service – The Commission will consider a Second Report and Order that would relax the siting rule for an FM fill-in translator rebroadcasting an AM broadcast station. (MB Docket No. 13-249)

Comprehensive Review of the Part 32 Uniform System of Accounts – The Commission will consider a Report and Order that would streamline and eliminate outdated accounting rules no longer needed to fulfill the Commission’s statutory or regulatory duties. (WC Docket No. 14-130)