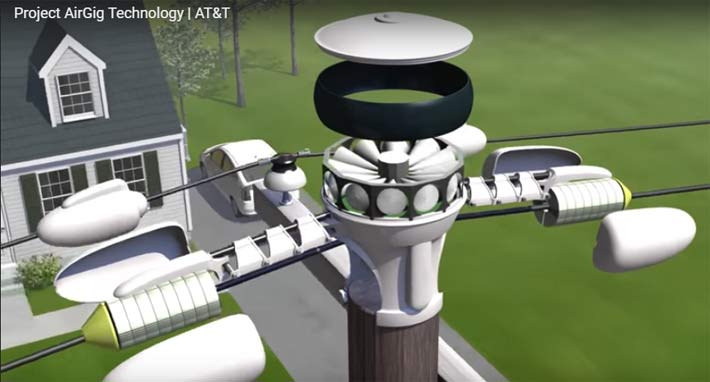 AT&T is in advanced discussions with power companies and others to trial Project AirGig in at least two locations by this fall. One location will be in the United States with others to be determined in the coming months.

AT&T has experimented with this unique, patented broadband-over-power lines (BPL) technology at their outdoor facility for some time with positive results. These results led to their development of new innovations like the Radio Distributed Antenna System (RDAS). Now, they’re closer to taking their trials to the next level.

In September, AT&T announced Project AirGig’s ambitious goals to give towers and fiber competition with their plastic antennas using the power grid.

“We are looking forward to begin testing the possibilities of AT&T Labs’ invention for customers and utility companies,” said Andre Fuetsch, president of AT&T Labs and chief technology officer. “AT&T is focused on delivering a gigabit-per-second speed everywhere we can with our wired and wireless technologies. Project AirGig represents a key invention in our 5G Evolution approach. AT&T Labs is ‘writing the textbook’ for a new technology approach that has the potential to deliver benefits to utility companies and bring this multi-gigabit, low-cost internet connectivity anywhere there are power lines – big urban market, small rural town, globally.”

Project AirGig Progress
More than 10 years ago, some AT&T Labs engineers worked on earlier experiments to deliver BPL. Back then, broadband merely meant megabit speeds. The technology worked well, but couldn’t keep up with the move to higher speeds.

Their engineers then shifted their focus from BPL to millimeter wave (mmWave) technology, and became curious about combining mmWave and powerlines. No one in the industry had connected these technologies together yet.

With the RDAS,they found a system design to effectively deliver not just broadband, but also mobile traffic. The mmWave surface wave launchers and inductive power devices can power themselves without a direct electrical connection. These devices create a multi-gigabit signal that travels along or near the wire – not through it. This signal means connected experiences become an everyday reality for people – regardless of location.

Future field trials will demonstrate how Project AirGig works to support power companies’ smart grid technologies, such as meter, appliance and usage control systems and early detection of powerline integrity issues. The trials will also evaluate the technology during inclement weather, such as rain, snow and high winds.