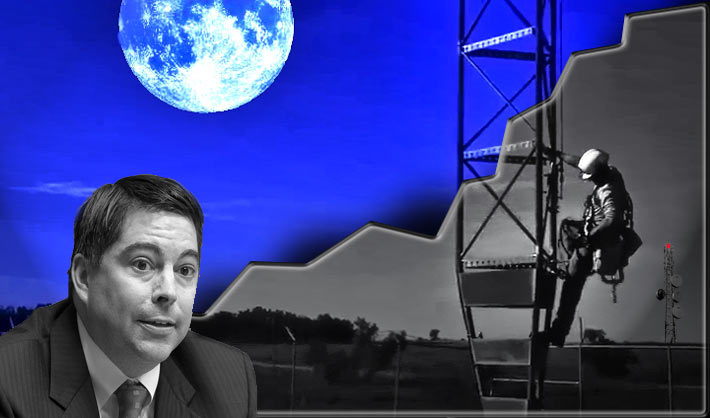 By Michael O’Rielly – FCC Commissioner
Having worked on numerous legislative efforts over the years, I have seen that it is not uncommon for very well-intentioned provisions contained within larger bills passed by Congress and enacted into law to lead to unintended negative consequences.

One such provision recently enacted in an FAA Authorization statute is causing a considerable level of unrest within affected communications industries. Specifically, section 2110 of the FAA Extension, Safety and Security Act of 2016 requires improved physical markings and/or lighting on various small to medium sized towers (i.e., those between 50 and 200 feet above sea level).

If implemented literally, the provision will force expensive retrofits to potentially 50,000 existing towers, such as wireless communications and certain broadcast towers, all new towers that meet the broad definition, and raise tower prices for the next generation of wireless services – all with little gain to air safety. I humbly suggest that a few helpful tweaks to the text could be in order.

It’s been portrayed that the scope of section 2110 was intended to be fairly narrow.  A number of articles and press stories indicate that it was designed to address the threat that small, low-flying aircraft, such as crop dusting planes, may face from temporary meteorological testing towers (METs), a small subset of towers.

This also seems relatively consistent with the National Transportation Safety Board’s (NTSB) 2013 safety recommendations to the Federal Aviation Administration (FAA) and its 2014 Special Investigation Report on the Safety of Agricultural Aircraft Operations.

While there is little legislative history to review, the provision’s requirements apply to certain towers located outside incorporated cities and towns, on undeveloped land or land used for agricultural purposes. It excludes those towers that 1) are adjacent to a house, barn, electric utility station, or other building; 2) are within the curtilage of a farmstead; 3) support electric utility transmission or distribution lines; 4) consist of certain wind-powered electrical generators; or 5) serve as street lights.

While the original intent of the provision may have been narrow, the language on its face is fairly broad, and therein lies the problem. In essence, those structures that are not specifically carved out are captured. That means that existing and future mid-sized communications towers throughout rural America are included. Unfortunately, getting service to these areas has been a real challenge for the private sector and the Commission, mainly for economic reasons.

By raising the siting costs with new marking mandates, it is harder for companies to justify the investments and any current or future deployments.  In other words, if a wireless company has limited dollars to invest, this provision could lead them to direct those funds to areas that are not affected by this provision.

This also may make the business case for bringing future 5G wireless services, which are likely to require even more poles to support a small cell network, to rural America even more challenging than it already is.  Further, it could hinder the incentive auction television station repack and the implementation of ATSC 3.0, which is a broadcasting standard designed to provide greater service options. Like many, I have argued repeatedly that we should remove barriers to the deployment of new wireless infrastructure, not add further ones unless absolutely necessary.

In addition, the statutory provision excludes certain categories of locations or those with proximity to specific technologies, which teeters on the edge of unequal application. It is perplexing that some technologies are specifically exempted, but permanent and non-moving communications towers appear not to be.  In particular, is there any data suggesting wireless or broadcast towers are more susceptible to be air safety hazards than towers used for electric utility transmission or wind turbines?  It would seem appropriate that communications towers should be treated similarly to those structures.

Adding to the overall difficulty, the text of the statute provides questionable flexibility to the Administrator of the Federal Aviation Administration (FAA). Arguably, the only way the Administrator could exclude a category of towers would be to redesign the tower marking guidance as part of the regulations required by the provision.

But we all know that this takes time and is quite an extensive process with an unclear outcome.  Without relief, communications companies will be forced to spend thousands of dollars per tower – potentially hundreds of millions nationwide – to come into compliance or face significant FAA penalties, and potentially FCC enforcement action, since we follow the FAA’s lead. This suggests a small legislative fix may be the best path to adequately address the issue.

I do not want to discourage or discredit any effort to protect the lives of those that fly agricultural aircraft or those on the ground. In terms of air safety for smaller agriculture planes, however, there seems to be misconception that communications towers have served as a significant impediment or threat.  Even the NTSB’s Special Investigation showed that of the 78 small aircraft accidents in 2013 only 16 were involved in some type of in-flight collision with an obstacle.

While this may seem significant, it includes those instances in which the pilot was previously aware of the obstacle, meaning new marking requirements would have been ineffective, and those involving non-communications related obstacles, such as trees or METs. Taking that into account, the data showed only two accidents involving communications towers. Not to mention, other problems, such as pilot fatigue and mechanical failure, present an equal or greater threat to agricultural pilots.

In fairness, big communications companies can generally defend themselves, as needed. But, the communications industry is not monolithic. There are thousands of smaller providers, such as wireless broadband providers (commonly referred to as WISPs), that use wireless towers to bring service to the hardest to reach consumers.

Accordingly, the added cost of this new mandate could impact their ability to grow or even survive.  Plus, there are new responsibilities to map the applicable areas to which section 2110 applies, requirements to participate in and potentially fund a database of existing towers in these areas, and overall compliance costs that add to the burdens for small providers. Moreover, in most instances, the costs of the marking requirements will be passed onto consumers, which is my main worry. Increasing the costs of communications services for lower and middle-income Americans should cause everyone concern, as it decreases adoption rates and deprives these families of technological benefits.

Mandating new marking and/or lighting burdens for certain temporary aerial towers to aid agricultural pilots is a laudable goal. However, the new statutory provision may have been drafted broader than intended and, as a result, it unnecessarily captures permanent communications towers that have little overall impact on agricultural air safety.  Taken together, it would seem that a small legislative fix to clearly exempt these towers or require the FAA Administrator to do so would be appropriate.