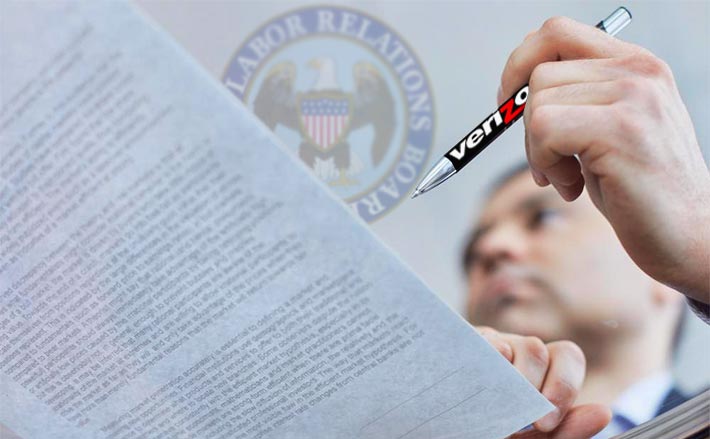 Instead of agreeing with the National Labor Relations Board’s decisions, Verizon is appealing them before the D.C. Circuit Court.

There were a number of lessons learned by wireless infrastructure companies last month when the National Labor Relations Board (NLRB) ruled that portions of Verizon Wireless employees’ handbook needed to be removed because they had the potential to suppress workers from not being allowed protected free speech.

The NLRB, in its Feb. 24 decision and order, said that Verizon must post a notice with all employees that they were in violation of federal labor law and detail the many violations no later than today.

Instead, Verizon filed a challenge of the ruling on Monday, asking the D.C. Circuit to review the NLRB’s decision.

The NLRB had also struck, amongst others, Verizon’s policy of stating it was an improper act if a worker disparaged or misrepresented the company’s products or services or its employees, as well as the requirement that could be reasonably read to prohibit employee discussions of wages, hours, and terms and conditions of employment.

Last month’s ruling had a number of companies reviewing their handbook policies to see if they could also be non-compliant with federal law.

One major contractor informed Wireless Estimator that they would monitor how the appellate court will rule since they have a similar rule in their company policy handbook regarding the use of company email  and phone correspondence not related to work activities – a challenge for employers in deciding upon which language in policies and in handbooks is correct.

The Midwest HR director said she is often faced with providing a perfectly worded rule or not including it in their policy.

A Vice President of a Southeast contractor with more than 10 field crews said that his company has a written policy in place that workers should only use their employer-supplied cell phones for company business.

“But we know that’s not the case, and we’ve allowed them to text and make personal calls since we want them to be in touch with their family, especially when they’re away from home.”

“What we won’t tolerate is abuse and we’ve had to address it on occasion,” he said, “once when it was brought to our attention that he was posting on Facebook too frequently when he should have been working.”

Verizon’s policy, which was partially struck down, said: “You may never use company systems (such as e-mail, instant messaging, the Intranet or Internet) to engage in activities that are unlawful, violate company policies or result in Verizon Wireless’ liability or embarrassment. Some examples of inappropriate uses of the Internet and e-mail include: Pornographic, obscene, offensive, harassing or discriminatory content; Chain letters, pyramid schemes or unauthorized mass distributions; Communications primarily directed to a group of employees inside the company on behalf of an outside organization.”

Verizon employees felt that they could be disciplined if they forwarded union literature or correspondence to workers, many of them only reachable through their Verizon email account.

They said the language was too broad, especially regarding what Verizon could consider as “embarrassment”.

Acting NLRB Chairman Philip Miscimarra dissented with board members mark Gaston Pearce and Lauren McFerran, believing that the board should consider an employer’s appropriate business justification for prohibiting or restricting employees’ use of a company’s business email and other communication systems.

Both board members cited case law under Purple Communications, 361 NLRB. No 126 (2014) where it was ruled by the NLRB that just because an employer owns the corporate e-mail system, it doesn’t have the right to ban or otherwise regulate employees’ nonbusiness use of that system.

The NLRB currently has two board vacancies.

Sarah Parrish filed the unfair labor practice charge in 2015 with the NLRB, and yesterday filed a motion to intervene in Verizon’s appeal.

Employee Privacy:
“Verizon Wireless acquires and retains personal information about its employees in the normal course of operations, such as for employee identification purposes and provision of employee benefits. You must take appropriate steps to protect all personal employee information, including social security numbers, identification numbers, passwords, financial information and residential telephone numbers and addresses.

You should never access, obtain or disclose another employee’s personal information to persons inside or outside of Verizon Wireless unless you are acting for legitimate business purposes and in accordance with applicable laws, legal process and company policies, including obtaining any approvals necessary under these policies.”

The NLRB required Verizon to post the following notice to employees:

The National Labor Relations Board has found that we violated Federal labor law and has ordered us to post and obey this notice.

FEDERAL LAW GIVES YOU THE RIGHT TO:
Form, join, or assist a union
Choose representatives to bargain with us on your behalf
Act together with other employees for your benefit and protection
Choose not to engage in any of these protected activities.

Fundraising that prohibits employees’ use of Verizon’s email system to engage in electronic solicitation or electronic distribution.

At a handful of locations where the 2015 Code of Conduct is not yet in effect, WE WILL NOT maintain the 2014 Code of Conduct Section 1.8 Employee Privacy which would be reasonably read to prohibit employee discussion of wages, hours, and terms and conditions of employment.

WE WILL NOT maintain the 2014 and 2015 Code of Conduct Section 3.4.1 Prohibited Activities which does not allow employees to access the Verizon email system for Section 7-protected communications on nonworking time and is also overly broad in the use of “embarrassment” as a cause for discipline in use of email, instant messaging, intranet, and internet.

WE WILL NOT maintain the 2014 and 2015 Code of Conduct Conclusion rule (1) prohibiting “disclosure of company, customer or employee records, data, funds, property or information (whether or not it is proprietary),” which would reasonably be understood to preclude you from discussing your wages, hours, and terms and conditions of employment and (2) prohibiting comments which are “disparaging or misrepresenting the company’s products or services or its employees” which would reasonably be read to mean that you could not speak to your coworkers and voice criticism of managers.

WE WILL NOT in any like or related manner interfere with, restrain, or coerce you in the exercise of rights guaranteed you by Section 7 of the Act. JD(SF)–38–15.

WE WILL notify all employees at all of our facilities within the United States and its territories where the 2014 and 2015 Code of Conduct Section 1.6 Solicitation and Fundraising, were in existence, that such policies have been rescinded and will no longer be enforced