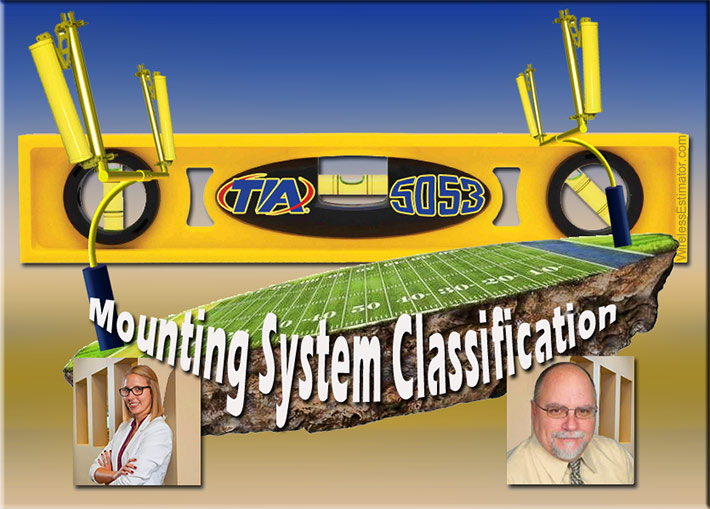 TIA-5053 Chairperson Michelle Kang and TR-14 Chairperson John Erichsen believe that the new mount classification standard will allow for a level playing field for manufacturers and improve the integrity of the structures deployed as new technology advances wireless infrastructure.

When AMPS cell tower antennas made their debut in Chicago in 1983 they were 14 feet in length and as PCS was introduced they slimmed down in size. Today, new base station architecture has remote radio heads tagging alongside the antennas and they may be on a mount designed for horizontal wind loads and not the vertical dead loads created by new LTE antenna designs — allowing for the possibility of mount failure.

With this month’s introduction of Telecommunications Industry Association (TIA) standard TIA-5053 – Mounting System Classification, owners will be able to determine the maximum loads that can be applied to existing mounting systems, as well as determine the proper mounting systems required for proposed antenna configurations.

“With 5G and Smart Cities on the horizon we will see increased demand for wireless service and therefore an increase in antennas being deployed,” stated Stephanie Montgomery, VP of Technology and Standards at TIA.

Montgomery said without proper mounting those antennas will be useless, and the use of the standard will save millions of dollars.

Cost savings to carriers will be considerable because the clas­sification will allow for a load comparison for future ad­ditions without the need for a mount analysis each time there is a loading change.

TIA-5053 is an outgrowth of a carrier-driven meeting of a number of mount manufacturers in February of 2014. Under the guidance of Chairperson Michelle Kang, PE, of the SSOE Group, the intent of the standard that was to be a few pages, ended up being 25 after almost four years of meetings to provide a system that would drive consistency between manufacturers in their conveyance of mount design loading and to allow purchasers to easily understand the capacity of the mounts they are buying.

Kang informed Wireless Estimator that as more stakeholders became involved, it was obvious that “there was a big disconnect” regarding capacity and loading placement, versus what contractors were installing in the field.

She estimates that the standard covers approximately 85% of currently installed mounts, and it serves as an excellent guideline “to get manufacturers on the same page.”

Kang noted that while TIA-5053 is a standard, it is a voluntary standard.

“Mounts can still be manufactured without following this standard, but if a manufacturer says that a mount is classified in conformance with this standard it must follow everything within the standard.”

The committee noted that in the past, engineers would frequently specify a specific manufacturer’s mount, allowing for an “equivalent”, but were not involved in the purchasing process, and there were no means to ensure equivalency, especially when many of the mount parts were field-fabricated.

Under the new standard, a comprehensive documentation package is required to accompany newly classified mounts which will also be physically tagged during installation for easy identification in the field that will identify the number of mounting pipe locations, the maximum factored vertical force for design under extreme ice conditions at each mounting pipe location and other details.

Maintenance loading is also considered as part of the TIA-5053 design, but a specified man-rating is not considered.

John Erichsen, Chair of TR-14 said the new mount standard will “assist and improve the industry’s deployment of new technology and improves the integrity of the structures deployed.”

Erichsen said the standard doesn’t commoditize mounts, but will create a “better opportunity to compare capacities, from company A to B.”

“It is a much-needed industry standard that facilitates the specifying, designing, and manufacturing of mounts,” said TIA-5053 committee member Dave Brinker of Rohn.

“Prior to this standard there was no consistency in the criteria for designing mounts in the industry, which led to confusion between owners, contractors and the suppliers of mounts.”

According to TIA-50-53, documents supplied with a mount classified in accordance with the technical bulletin shall include:

TIA actively seeks participation in these projects from the user and general interest communities. For more information about TR-14 and how to participate in standards development with TIA, contact: Marianna Kramarikova at standards@tiaonline.org.

TIA-5053 and all TIA standards may be purchased at http://global.ihs.com.