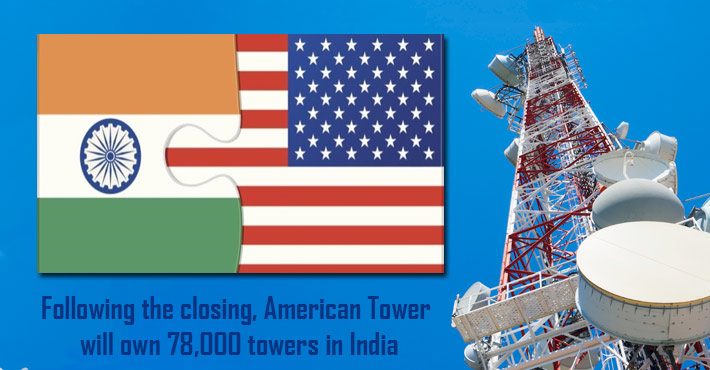 ATC Telecom Infrastructure Private Ltd. is buying the sites and expects to generate roughly $320 million in property revenue from the assets during the first full year of ownership, American Tower said today.

In both deals, the companies agreed to become “preferred partners” to American Tower – which means the two will secure preferential rights to continue using the sites alongside the infrastructure company’s other assets.

American Tower CEO Jim Taiclet said: “We expect the addition of these two high quality portfolios to be highly complementary to our existing assets and to contribute to long-term leasing growth as India’s leading mobile operators accelerate their 4G network deployments.”

American Tower already has a significant presence in India as part of its portfolio of 169,000 worldwide sites when the deal is completed with a total of 78,000 structures in India.

The planned merger by Vodafone India and Idea Cellular will reduce the tenancy rate on approximately 6,300 duplicated sites, according to Chris Lane, an analyst at Sanford C. Bernstein & Co.

The tower deal’s valuation is “on the low side,” because the tenancy ratio is low and set to fall after the merger, Lane said in an email.

The tenancy ratio is expected to rise to 2.9 times by March 2020, from about the 1.95 times average for India as of 2015, according to a study last year by the Associated Chambers of Commerce and Industry of India and audit firm KPMG.

Vodafone India’s 10,235 towers had a tenancy ratio of 1.52 while the 9,900 towers Idea owns had a slightly higher ratio at 1.8, according to the statement by both the companies.

Amit Sharma, American Tower’s EVP and President, Asia and Chairman of the Board, ATC TIPL, added, “We are extremely pleased to partner with Vodafone and Idea to help expand mobile broadband services across India while furthering our participation in the Digital India initiative.”