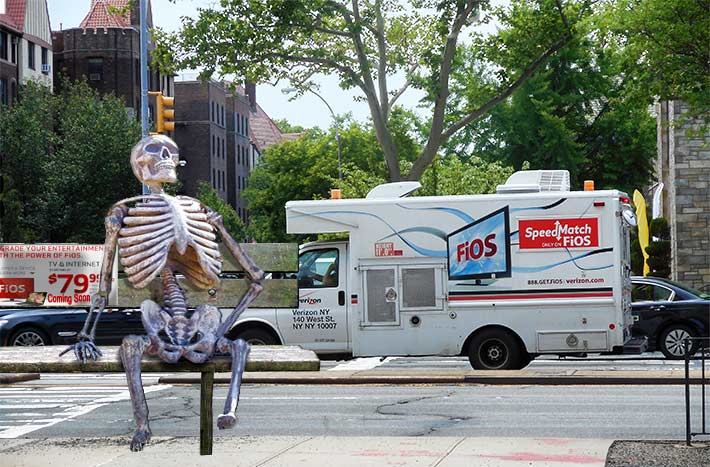 New York City Mayor Bill de Blasio said, “No corporation, no matter how large or powerful, can break a promise to New Yorkers and get away with it.” The City’s lawsuit said “tens of thousands” of customers are still waiting for Fios hookups. Verizon says it it partially the City’s fault and they might have to wait longer.

In correspondence sent to New York City on Friday, Verizon said they were looking forward to “constructive dialog” to resolve the City’s Fios build-out concerns. New York wasn’t as accommodating when it slapped Verizon with a lawsuit on Monday.

In a complaint filed in New York State Supreme Court, New York City contends that Verizon is in breach of a 2008 agreement that called for the carrier to build a city wide Fios network that was to be completed three years ago.

In the lawsuit filed Monday, after Verizon would not agree with New York’s Department of Information Technology and Telecommunications’ (DoITT) demands made March 2, the City said Verizon has failed to make its service available to at least “tens of thousands” of customers and has refused to accept service requests from city residents.

“Verizon must face the consequences for breaking the trust of 8.5 million New Yorkers. It’s 2017 and we’re done waiting. No corporation, no matter how large or powerful, can break a promise to New Yorkers and get away with it,” said Mayor Bill de Blasio in a statement.

In response to the DoITT’s demands, in a letter from Verizon, dated March 10, Craig L. Silliman, Executive Vice President of Public Policy and General Counsel, said: “…your letter seeks extraordinary ‘commitments’ from Verizon that are far beyond anything the City ever asked Verizon to accept and anything Verizon would or did agree to accept when we were negotiating the agreement. They amount to a unilateral rewrite of the Agreement and they remain unacceptable now.”

Under the agreement signed in 2008, the broadband, TV and phone giant was expected to wire every home or apartment building in the city by 2014.

Verizon must “pass all households” with its fiber-to-the-premises network by June 30, 2014, the agreement said. The agreement covered only cable television, but the fiber build-out also provided faster Internet speeds because the same fiber is used to deliver both services.

“This build-out required Verizon to install fiber optic cable—in underground conduit, along above-ground utility poles, or otherwise—in front of (or behind) each residential building,” the complaint says.

The City says that even Verizon agreed with this interpretation, quoting a Verizon statement to the New York Public Service Commission in 2008 that said its fiber-optic distribution facilities “will have to be run past all of the residence locations in the city.”

The complaint also alleges that Verizon is required to maintain records pertaining to its provision of cable service, but has “failed to make available a large portion of the records reasonably requested by the City”.

Verizon said it had spent $3.7 billion to “pass” every residential building and “have fiber up and down each street and avenue in the entire city,” but it had issues gaining access to properties from landlords, and the city didn’t come forward with assistance.

However, in an audit conducted in 2015, the City stated that it was Verizon that was holding up non-standard installation service requests (NSIs), citing an example where one property manager from a well-known firm complained that Verizon would not complete the NSI at a building on Sutton Place unless 100 percent of the apartment dwellers committed to Verizon FiOS.

“This property manager also said only two of the 11 multiple dwelling properties he managed had Verizon FiOS and that installations took anywhere from six months to two years,” the report noted.

“The de Blasio administration is disingenuously attempting to rewrite the terms of an agreement made with its predecessor and is acting in its own political self-interests that are completely at odds with what’s best for New Yorkers,” Verizon spokesman Raymond McConville said in a statement.

Verizon said it plans to “vigorously fight” the city’s allegations.