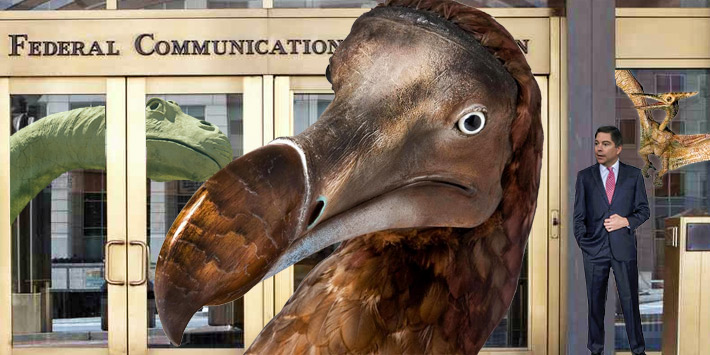 FCC Commissioner Michael O’Rielly’s opening speech during a panel session at the NAB convention yesterday questioned whether the FCC should go the way of the Dodo Bird or dinosaur and be ‘fired’.

Federal Communications Commissioner Michael O’Rielly said in a speech at the NAB show yesterday afternoon that it’s up to Congress to decide whether the FCC should “go the way of the Dodo” and be eliminated with its responsibilities divided up among other federal agencies.

The FCC, originally established to prevent spectrum interference among radio users, has grown into a behemoth agency, affecting a staggering array of industries, transactions, devices, content and consumers.

Panelists discussed whether the FCC regulates too broad a swath of our economy, and does so with a very heavy hand, or as others think, it should control and regulate more.

Moderated by Hap Rigby, Senior Policy Advisor for Wiley Rein LLP, panelists generally agreed that eliminating the FCC would create problems because other agencies do not have the expertise to take over its duties.

Former FCC Commissioner and Partner at Cooley, LLP, Robert McDowell, said to provide for an overhaul of the FCC would take a unified effort.

Cooley served as a Commissioner under Presidents George W. Bush and Barack Obama.

In O’Rielly’s opening discussion, below, he outlined the history of the FCC and questioned whether the FCC should be “fired”.

But after O’Rielly threw out some bones for the panelist to chew upon, he finished with this caveat: “In the grand scheme, whether to jettison the FCC is not for any of us to ultimately decide. Hearty discussions are important and should continue to be had as they can inform policymakers, in this case Congress. But the hopes for any real fundamental restructuring of the agency’s duties – or even if it should exist – will require legislation, which has proven difficult to enact for many reasons.”

Remarks of FCC Commissioner Michael O’Rielly
2017 NAB Show Panel “FCC: You’re Fired?”
April 24, 2017
Comedian Wanda Sykes once observed, “It’s hard to get fired from the government. You have to, like, kill people.” While the FCC can kill businesses, kill business plans, kill employment, kill technology, and of course, kill dreams, it doesn’t kill people, at least to my knowledge. So, maybe it can never be fired?

Nonetheless, I am hoping the next sixty minutes provides a provocative debate on whether there still should be an FCC or whether it can go the way of the dodo bird. My goal today is to help set the stage for the upcoming panel by outlining some thoughts that can serve as a basis for the overall discussion.

To properly debate the merits of the current FCC, you first must understand its original purpose. On April 14, 1912, in the freezing waters far off the coast of Nova Scotia, the luxury ship Titanic hit an iceberg and sank, leading to the deaths of more than 1500 people. That tragedy – and the role that radio technology played in it – spurred the federal government to lay claim to the radio spectrum to facilitate ships at sea communications and force radio users to obtain licenses.

Not surprisingly, the Radio Act of 1912 was born four months after the Titanic sunk. This eventually led to the Radio Act of 1927, which became the Communications Act of 1934. So, if there is anyone to blame for the modern construct known as the FCC, I’d have to partially lay it at the feet of your radio brethren. I’m joking; I’m joking. Everyone knows human tragedies produce the worst legislation so you should blame Congress, as everyone always does anyway. Still joking.

It is telling for our debate today, however, that Congress assigned the implementation and enforcement authority resulting from the Radio Act of 1912 to the then-Secretary of Commerce and Labor. It wasn’t until the 1927 Act that an independent agency was created, and it wasn’t until the Obama Administration that the independence of the agency was effectively eviscerated. Too soon?

Like the panelists to come, I have participated over the years in numerous discussions on the FCC’s future, including whether its functions should be moved to another agency or within the Executive Branch. Notably, those on Capitol Hill often led the charge to question the modern Commission’s ability to follow the law, its desire to inject social policy outcomes where none were requested, its ability to recognize the costs and benefits of burdens it imposed, its willingness to extract even more universalservice collections from consumers and spend such funds, and so on. Likewise, there was recognition from many in Congress, at least when I was there, that the Commission’s internal siloed structure no longer makes sense as it pertains to the commercial marketplace it oversees. While the frustration level with the Commission tended to ebb and flow depending on the controversial nature of its items, there remained an overall belief among many, at least in my opinion, that we expected better results from an agency entrusted with the Commission’s responsibilities and funding levels.

However, conversations about the Commission’s future usually ended in the same quandary – a recognition that, regardless of where one stood on the Commission’s role, communications policy had to be done somewhere. Thus, the questions then turned to where should these issues be housed. In other words, if you are going to fire it, who would you hire in its place, if anyone. Admittedly, a large argument for maintaining the Commission was its independent structure that helped insulate the agency from the political environment of Washington, D.C. To the extent that independence no longer exists, I can see great interest in revisiting this entire issue.

In terms of substance, it seems appropriate to ask how the modern FCC is handling one of its original tasks: properly maintaining the radio spectrum? I suggest that the answer is poorly. For several reasons, the Commission is not sufficiently able or willing to properly police radio spectrum to ensure licenses are protected. Nowhere is this more evident than with the illegal squatters sitting in the radio band. Pirate radio stations harm public safety, the livelihood of legitimate radio broadcasters, and the FCC’s spectrum enforcement creditability. If allowed to continue on its current path, the situation will get worse. These “stations” will multiply in markets already infected and spread to other markets as well.

Despite publicizing this issue and having some success in changing the illogical perception of people that pirate radio is beneficial, a ton of work remains. For some improvements to occur, new tools may be necessary, and that’s why I’ve testified before Congress to provide some targeted statutory changes to our overall authority. But the bigger issue is the state of the Commission’s Enforcement Bureau, which is most certainly not the fault of our new chairman and his team. Instead, this has been a long time coming. While the Enforcement Bureau’s D.C. front office expanded considerably, the demoralized field office staff is expected to do more with less. Additional attention should be spent on this core problem, instead of staff pursuing the past Administration’s projects.

If the Commission cannot sufficiently protect the airwaves, the harm will expand beyond radio stations, which is bad enough, to devalue spectrum licenses for wireless communications, eliminate or narrow access to capital for such networks, and wreak havoc to the development of the flexible ATSC 3.0 standard. As I mentioned, there is much work still to do in this area.

Thankfully, the new Commission benefits from having a Chairman and Commissioners that respect one another and the attributes that each brings to the table. This relationship is not only good for the agency but it should also be beneficial to the broadcasting industry. Gone are the days of the Commission being a constant irritant, or worse. On that note, I am reminded of a quote attributed to former President Ronald Reagan, “Personnel is policy.” Translated loosely it means that whoever is put in positions of leadership will determine the success of the agenda. With that, I think the new president has done a wonderful job in selecting our current chair to lead the Commission during this interesting time. Chairman Pai brings with him a love of broadcasting, a love of small businesses, a love of Kansas, and so much more. His selection may prove the catalyst for the regulatory golden age of our nation’s broadcasters.

Any discussion of whether to eliminate the Commission must include an examination of the positive things that may be achieved under this new leadership. The new Commission is poised to reduce regulations for the broadcasting community. In a methodical and thoughtful way, the Commission is open to reviewing every burden imposed on broadcasters to determine if each regulation is still needed in the 21st Century.

Case in point, I believe that the Commission can and will pursue an update of our current media ownership rules. For too long, our ownership limitations have hamstrung broadcasters in a bygone era, while the rest of the video and audio marketplace was generally unimpeded by government regulation. This discriminatory approach has harmed broadcasters and hurt their ability to compete. Outdated rules like the cross-ownership bans, the duopoly rule, the voices test, and radio submarket caps need to be updated or discarded. It is no longer acceptable to ignore the need for these changes just because the legal terrain is difficult.

In addition, I suggest to you all that the Commission needs to place the entire regulatory regime imposed on the broadcasting industry under the microscope. Those rules that don’t survive scrutiny should be junked. The result would be a leaner regulatory structure that has reduced compliance costs, thereby providing savings to reinvest elsewhere. In the past, I’ve asked for your suggestions on what areas to focus such a review; I’m hopeful that you are finally ready to take me up on my offer.

In the grand scheme, whether to jettison the FCC is not for any of us to ultimately decide. Hearty discussions are important and should continue to be had as they can inform policymakers, in this case Congress. But the hopes for any real fundamental restructuring of the agency’s duties – or even if it should exist – will require legislation, which has proven difficult to enact for many reasons.

In the meantime, the agency can address many of its flaws on its own. Better protecting the airwaves would demonstrate our commitment to a key original obligation. Additionally, reorganizing the internal structure and removing unnecessary burdens on broadcasters would line up nicely with the policy goals of many of us at the Commission. In closing, let me suggest that the new Executive Branch and Legislative Branch provide you with a wonderful opportunity – use it wisely!

Hopefully, this provides the panel to come with enough material. Thank you so very much for your attention and I wish you all success for the rest of the show and in the many months ahead.