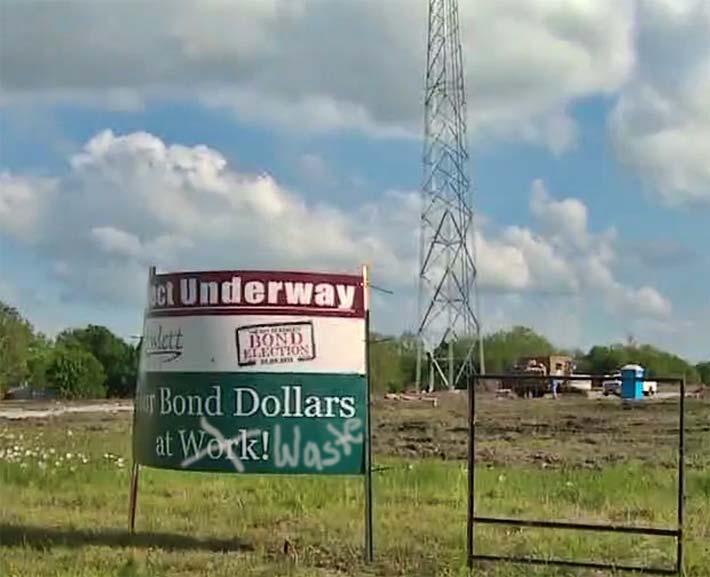 The city of Rowlett, Tex. was proud that the self-supporting tower and equipment would be paid for through bonds, but was ploughed under with a $478,000 mistake.

For 13 years Wireless Estimator has been covering the wireless siting community and is always in search of the man bites dog story rather than a mundane municipal siting protest. Today, we found one in Rowlett, Tex. where a city tower was built on their neighbor’s adjoining property.

But instead of moving the tower, equipment shelter and generator to the city’s property a stone’s throw away, Rowlett decided to buy the land because it might possibly incur a $400,000 penalty for not having the tower constructed to tie into a multi-jurisdictional police communications system in the required timeline. 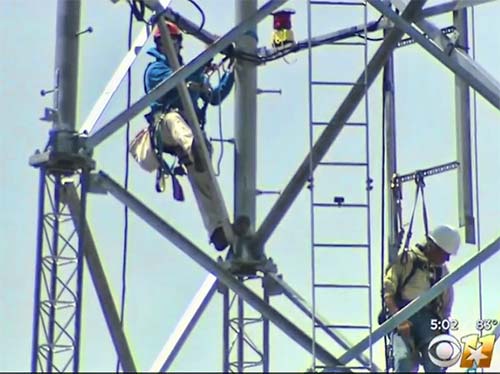 CBS Channel 11 shot video yesterday of tower erectors working on the structure that is expected to be completed by next month. The tower tech at right appears to be incorrectly tied off to a waveguide  ladder rung.

The city said that it would cost between $450-$500,000 to move the tower, which appeared to be high, according to industry estimating.

The mistake was discovered in early March, a month after Intertek, Motorola’s contractor, began construction, when the landowner who lives four miles away informed Rowlett officials of his concern.

The landowner, whose vacant field is the same size as the city-owned property, 4.2 acres, said he didn’t want to swap properties, but was amenable to selling it to assist the city — and his bank account.

Caught between a rock and a pier and a pad and profit
The city’s land value is assessed at $183,430 and Thomas and Alekutty Chacko’s property is valued at $183,870, according to tax rolls reviewed by Wireless Estimator.

However, Chacko negotiated a deal with Rowlett to sell the four acres for $478,000, and the city approved a resolution to purchase the property Tuesday evening.

Rowlett’s City Manager, Brian Funderburk, said, “The city recognizes the concern  this situation generates and is engaging an independent party to conduct a thorough review to determine how the miscalculation occurred.”

Last year, a homeowner in Santa Clarita, Calif. also found his pot of gold when a Crown Castle monopole was mistakenly installed on his property and not on Newhall Water’s property next to a water tower

Six-foot tribal easement dispute sidelines equipment usage
Also in the news this week, Burnett County, Wis. emergency service workers are waiting for over $200,000 worth of communications equipment to be fired up, but they can’t light a fire under the St. Croix Band of Chippewa to move forward and give them a six-foot easement to obtain power from Polk Burnett Electric Utility. 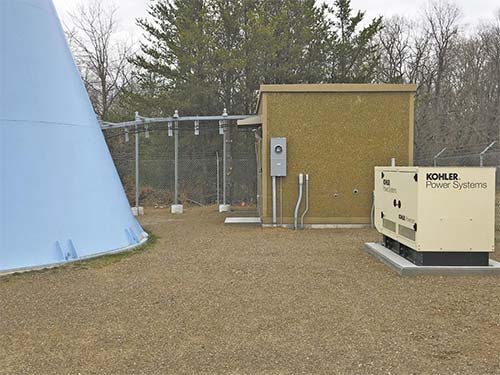 ALL DRESSED OUT AND NO WHERE TO GO TRANSMIT – Over $200,000 worth of equipment sits idle for lack of a six-foot easement to connect equipment to Polk Burnett Electric Utility power.

According to the Burnett County Sentinel, Burnett County has their antennas installed on the tribe’s water tower and their generator, fuel tank and shelter are in place, but the power company needs to cross a six-foot easement and the tribal attorney is not responding.

Burnett County Infrastructure Committee member Emmett Byrne asked, “They (the tribe) did  grant permission to use the tower, right? It seems to me that making the connection would be part of that agreement.”

County Administrator Nate Ehalt agreed, adding, “We are working with a sovereign nation here, so it’s not exactly the same situation you would have if you were dealing with the DNR, for example. Our Emergency Management Department has reached out to its tribal counterpart. I have too. Neither one of us have been able to get anywhere or reach an understanding.”