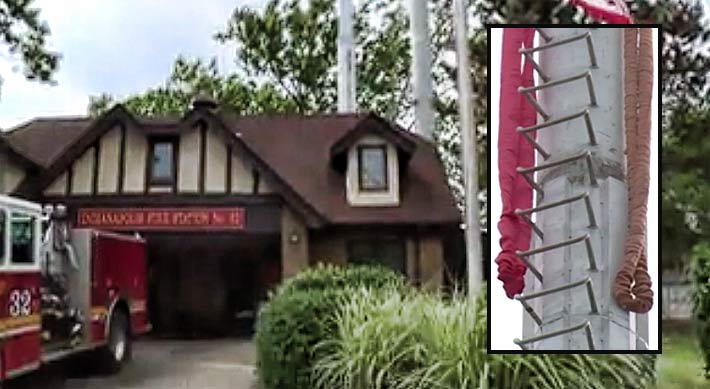 The monopole that was being decommissioned was directly behind the fire station, but the station’s crew was relocated for safety purposes.

Update: June 14, 2017 – According to tower technician Jake Caldwell of Avon, Ind., he had been on the tower and had a mishap with a grinder and cut his arm pretty badly. “Upon hearing my screams, one of my buddies on the ground came up and rescued me. All in all it took seven minutes to get me from tower top to ambulance. I’m just happy I’m ok and sitting next to my wife and son for another day,” Caldwell said in a Facebook post in reference to the Wireless Estimator article.

An Indianapolis, Ind. man who was dining with his family heard a commotion outside the restaurant and when he left the Canal Bistro on Guilford Ave. at around 12:30 p.m. on Monday to look, he saw a tower tech hanging from ropes on a Crown Castle cell tower monopole that was being dismantled.

But according to Lickliter in an article on WTTV’s website, he was put on hold and then it took a minute to connect to a dispatcher.

After explaining the situation, he was transferred to a fire dispatcher and had to tell them everything all over again.

Adding to the confusion, Lickliter couldn’t identify the actual location he was at, expecting the dispatcher could use his phone’s location.

And adding to the response time of at least 10 minutes was the fire rescue vehicle was a distance away because the tech and his crew were taking down a tower directly in back of the fire department and the structure’s owner, Crown Castle, had requested that the crew at Station 32 should be relocated while they were removing the tower.

One of the tower tech’s coworkers was able to get to him with a crane before the fire department arrived and medics took over treatment before transporting the worker to the hospital.

A representative for Crown Castle, issued a statement that the worker’s “injury is not severe” and that Crown Castle “is committed to the safety of our contractors and employees”.

The Marion County Sheriff’s Office is currently investigating why it took so long to reach a dispatcher.