The Wireless Infrastructure Association (WIA) today announced that Steven Marshall, Executive Vice President and President of the U.S. Tower Division at American Tower Corp., was elected to serve as Chairman of the WIA’s Board of Directors. 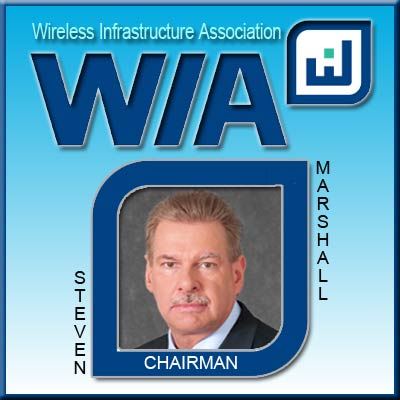 Marshall has served on the WIA Board of Directors since 2010 and brings a depth of industry experience and business leadership to WIA. He joined American Tower in 2007 as Executive Vice President, International Business Development. Before that, he was Chief Executive Officer of National Grid Wireless, a leading telecommunications and broadcast infrastructure provider in the United Kingdom.

“Steven Marshall has an unparalleled understanding of the wireless infrastructure industry and the critical role it plays in the mobile networks our communities need,” said Jonathan Adelstein, CEO and President of WIA. “WIA remains the industry’s leading voice in Washington and around the country. Steven’s experience and leadership will provide valuable guidance to WIA and our members as we build the foundation for a stronger mobile future.”

“As our industry’s advocate, WIA effectively guides policy around wireless technology infrastructure,” said Marshall. “American Tower has been a strong supporter of these efforts for many years and I, along with my fellow board members, look forward to building on WIA’s success in ensuring responsible broadband deployment wherever needed.”