The Chairman of the Board of Directors of the Wireless Infrastructure Association (WIA), Thomas A. “Tam” Murray, today urged members of the House Subcommittee on Communications and Technology to continue its work toward streamlining the widespread deployment of wireless broadband in communities throughout the United States.

He also informed the subcommittee that WIA was “tremendously in favor of long lease terms on federal lands,” and that a small cell would be more adequately described as one being 50 feet or less in height. 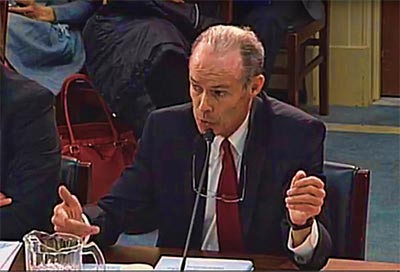 On a personal level, he said, “a pet peeve of mine is I would love to see Congress fund the FCC more on the proceeding that they are doing” [on siting assistance].

The purpose of the hearing – titled “Broadband: Deploying America’s 21st Century Infrastructure” — was to discuss barriers at the federal level that hinder private investments in broadband infrastructure and to examine legislation intended to remove these barriers. The subcommittee also discussed the challenges of collecting, aggregating, and making available accurate data relating to the availability of broadband service across the United States.

Fifty feet is set as a good small cell height
Stating that siting regulations that are appropriate for macro towers most likely would not work for small cells, Ohio Congressman Bill Johnson asked Murray, “Does it make sense to use rules designed for macro towers when wireless towers will be rolling out small cells, as many as 300,000 around the country? Don’t we need to update rules for updated technology?”

“Yes, we absolutely do,” replied Murray. “The networks today are a combination of solutions. If you drive to Baltimore, the phone works in the Baltimore tunnel and that’s distributed antenna systems. If you have a good signal at the metro stop it’s through DAS. The macro site, the tall tower, 199-foot monopole or lattice tower; that still has a long, healthy future in this country. But the solution is going to be a combination of solutions – a Swiss army knife, if you will.”

“As far as the rules go, no, we have a challenge. There is an entity that is claiming that a small cell is 120 feet. There has to be respect for the standards that have been in place for thirty years. In our thought, you take a utility pole, you add ten feet, you add some antennas, that is roughly 50 feet, and that is a good definition of a small cell. That and a stature less than that we believe should be expedited in some fashion.

Murray, one of the five witnesses before the subcommittee, said he believes “local control, responsible local approval is a good idea”.

“As a small business owner, every day I see the challenges posed by unreasonable deployment barriers at federal, state and local levels,” Murray said in written testimony. “These barriers include cumbersome siting procedures, inconsistent fees, complicated review processes and obstacles to deploying infrastructure on federal property.”

Murray stressed the need for Congress to work toward streamlining siting of wireless facilities on federal property, to improve the burdensome process of site review by Native American tribes, and to clarify how regulations affect the deployment of small cell technologies in wireless networks.

“5G will require an ongoing densification of mobile networks,” Murray said. “From macro towers to small wireless facilities, such as small cells, all forms of infrastructure will be needed to bring about the promise of next generation wireless and to meet consumers’ demand for mobile data. When deployed rationally, these types of infrastructure serve to complement each other and improve the network as a whole.”

“What began as an effort to provide the convenience and luxury of mobile voice communications has become an essential part of daily life,” Murray said. “And it shows this industry’s impact on the economy. A recent Accenture study found that 5G deployment could spur as much as $275 billion in private investment and create three million jobs over the next seven years.”

“The burgeoning demand for mobile data underscores the need for government policies that support meeting it by efficiently and responsibly deploying wireless infrastructure,” Murray said.

Murray has been in the wireless infrastructure business for the last 20 years, and is the founder and managing member of Community Wireless Structures, a small communications tower developer based in Virginia.