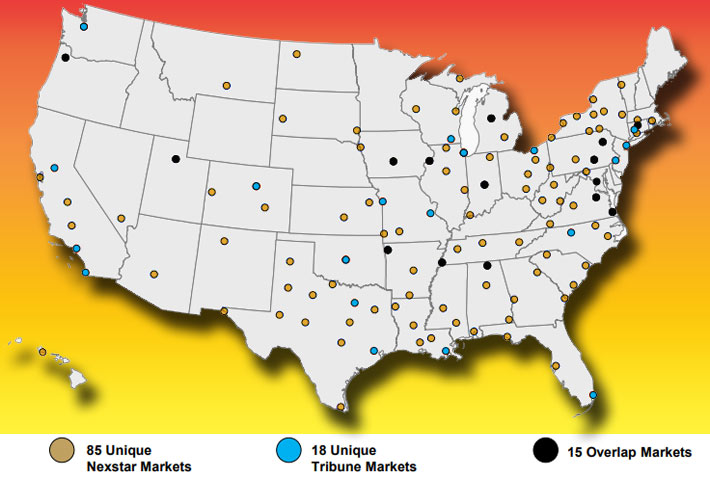 Nexstar and Tribune have overlapping stations in 15 markets, and to comply with FCC local and national rules and Justice Department antitrust guidelines, Nexstar would be required to spin off stations in at least 13 markets. The deal gives Nexstar an additional 12 tall broadcast towers.

Nexstar Media Group, Inc. and Tribune Media Company announced today that they have entered into a merger agreement whereby Nexstar will acquire all outstanding shares of Tribune Media for $46.50 per share in a cash transaction that is valued at $6.4 billion including the assumption of Tribune Media’s outstanding debt.

NexStar owns and operates 139 broadcast towers, according to Wireless Estimator’s Top 100 Tower Owners database, and will pick up an additional 12 as part of the Tribune buy, the tallest being 1,173-feet in Figure Five, Ark.

Perry Sook, Chairman, President and CEO of Nexstar, commented, “Nexstar has long viewed the acquisition of Tribune Media as a strategically, financially and operationally compelling opportunity that brings immediate value to shareholders of both companies. We have thoughtfully structured the transaction in a manner that positions the combined entity to better compete in today’s rapidly transforming industry landscape and better serve the local communities, consumers and businesses where we operate. As with our past transactions, we have developed a comprehensive regulatory compliance plan and believe we have a clear path to closing. With committed financing and a plan for significant synergy realization that will result in only a minimal increase in Nexstar’s pro-forma leverage, the combined entity will be poised for growth, leverage reduction and increased capital returns for shareholders.”

Peter Kern, CEO of Tribune Media, said, “We are delighted to have reached this agreement with Nexstar as it provides Tribune shareholders with substantial value and a well-defined path to closing. Together with Nexstar we can better compete by delivering a nationally integrated, comprehensive and competitive offering across all our markets.  We believe this combination will produce an even stronger broadcast and digital platform that builds on the accomplishments of both companies and benefits our viewers and advertisers. The premium value our shareholders are receiving reflects the hard work of our dedicated Tribune employees in maximizing the value of our portfolio. I look forward to working closely with the Nexstar team to deliver on the value of this compelling combination and to ensure a smooth transition and integration of our companies.”