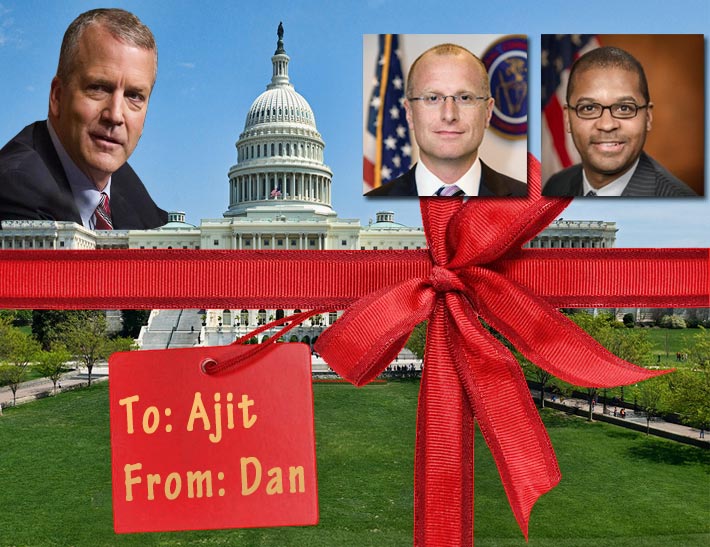 Alaska Republican Senator Dan Sullivan (from left) could unblock a floor vote before the end of the year for FCC Commissioner Brendan Carr and FCC assistant Bureau Chief Geoffrey Starks. Sullivan is at odds with FCC Chairman Ajit Pai over subsidies. Sullivan’s holiday gift to Pai would see the agency start 2019 with a full panel of five Commissioners.

UPDATE: December 14, 2018 – U.S. Senator Joe Manchin (D-WV) has put a hold on FCC nominee Brendan Carr’s confirmation to a five-year term. Last week, the FCC announced that they were indefinitely pausing the release of $4.5 billion through Mobility Fund Phase II.

Six months after being nominated by President Donald Trump to fill the slot of FCC Commissioner Mignon Clyburn (D) who resigned in April, FCC assistant Bureau Chief Geoffrey Starks might be approved by a full Senate vote in the next week or so.

If there is a vote, it is expected that Commissioner Brendan Carr will also be confirmed to a five-year term ending in June 2023. The party in power is allowed a majority on the five-seat FCC panel.

However, if it is still delayed, Carr who led the charge to pass a wireless infrastructure small cell report and order that is slated to become effective on January 14, 2019, cannot serve as a Commissioner past Dec. 31, 2018.

In January, the Senate Commerce Committee voted to confirm Carr for a full five year term that was supposed to begin on July 1, but like Starks, a Senate vote never happened after Alaska Republican Senator Dan Sullivan blocked the floor vote to protest the agency’s handling of a broadband subsidy program.

Starks has bipartisan support, including Senate Minority Leader Chuck Schumer (D) who has championed Starks to become the fifth Commissioner, but over the months there appeared to be no urgency for a full Senate vote since the Republicans have been reportedly wrangling to assemble a larger package of Trump administration nominees that could advance by unanimous consent.

Law360, reported on Wednesday that a block on a vote allowing Starks to fill out the remainder of Clyburn’s term ending June 30, 2022, and for Carr to complete five years, “could be removed by the end of the year,” according to  Sullivan who stated, “That’s the goal.”

According to Politico, FCC Chairman Ajit Pai met with Sullivan in November to discuss how the agency distributes subsidies.

Specifically, how the FCC handled a funding request from the Anchorage-based General Communications Inc. (GCI) that would provide telecom services to rural health care providers.

In October 2015, GCI was fined $620,500 by the FCC for not registering 118 towers and lamping three structures, the highest fine ever levied against a tower owner.

Although he might have been involved in the investigation, Starks wasn’t appointed to his position as assistant chief of the Enforcement Bureau until November 2015, where he headed the Bureau’s Investigations and Hearings Division.

Sullivan was one of a group of 30 Senators who sent a May 14, 2018 letter to Chairman Pai urging him to strengthen the Rural Health Care Program to address the shortage of broadband connectivity in rural America.

The initiative, touted as bipartisan, only had one other Republican supporting the effort, Senator John Hoeven of North Dakota.

Democrat Starks, aligning himself with Clyburn’s positions on net neutrality and media consolidation, sailed through his Senate Commerce Committee confirmation hearing with an unanimous vote.

The Senate Committee voted to confirm Carr in January for a five-year term in a 14-13 party-line vote.