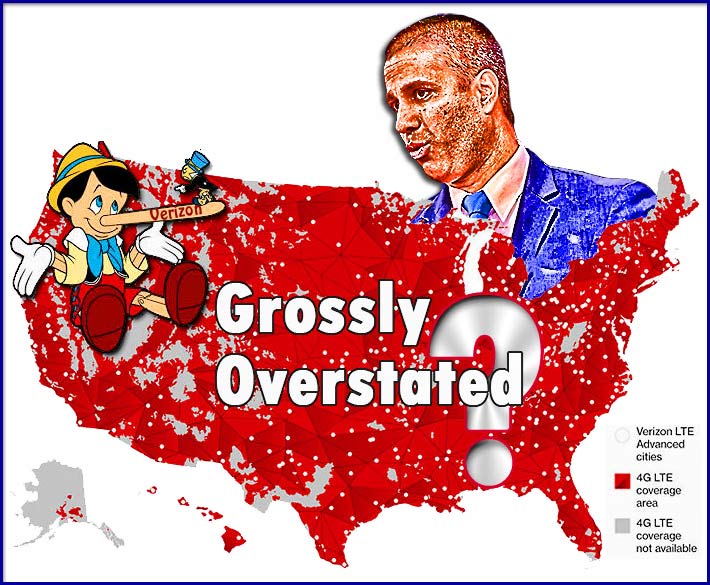 FCC Chairman Ajit Pai said that his agency will be investigating whether there were any Pinocchio presentations when carriers submitted their coverage maps. Verizon was singled out by RF engineers in July for “grossly” overstating their nationwide coverage.

The FCC has opened an investigation into whether some wireless carriers falsely reported information about the coverage areas to the agency, therefore violating mapping rules pertaining to the Mobility Fund Phase ll reverse auction.

In halting the $5.4 billion program, FCC Chairman Ajit Pai, said in a statement, “My top priority is bridging the digital divide and ensuring that Americans have access to digital opportunity regardless of where they live, and the FCC’s Mobility Fund Phase II program can play a key role in extending high-speed Internet access to rural areas across America. In order to reach those areas, it’s critical that we know where access is and where it is not. A preliminary review of speed test data submitted through the challenge process suggested significant violations of the Commission’s rules. That’s why I’ve ordered an investigation into these matters. We must ensure that the data is accurate before we can proceed.”

“Chairman Pai’s decision to launch this investigation has my full support,” said FCC Commissioner Brendan Carr on Friday.  “Earlier this year, I said I would monitor how the maps align with consumers’ real-world experiences.  Now that the challenge process has closed, the data provided confirm that Chairman Pai has made the right call.

“Throughout this process, I heard from providers serving the Oklahoma panhandle and communities across rural America.  I spent time in small towns and rural counties in Mississippi, Nebraska, Colorado, and other states and heard firsthand the challenges that many Americans face in getting a high-speed, 4G LTE connection.  It’s more than a frustrating inconvenience.  It limits access to economic opportunity, to a 21st century education, and to high-quality telehealth applications.  That’s why it’s so important to ensure the data underlying our broadband maps are accurate.

“It is deeply concerning that FCC staff’s preliminary analysis of the challenge data shows that one or more major carriers potentially violated the Commission’s MF-II mapping rules and submitted incorrect maps.  Today’s announcement aligns with concerns I shared with Chairman Pai, and I look forward to working with him and our able staff to complete this investigation,” said Carr in his statement.

The FCC is currently in the middle of a challenge process that lets carriers dispute the data submitted by competitors. Rural providers have claimed, in addition to spending hundreds of thousands of dollars, that they have had to devote “enormous time and financial resources” to drive tests in order to challenge Verizon’s maps.

The FCC has suspended the next phase of the challenge process pending the results of the investigation.