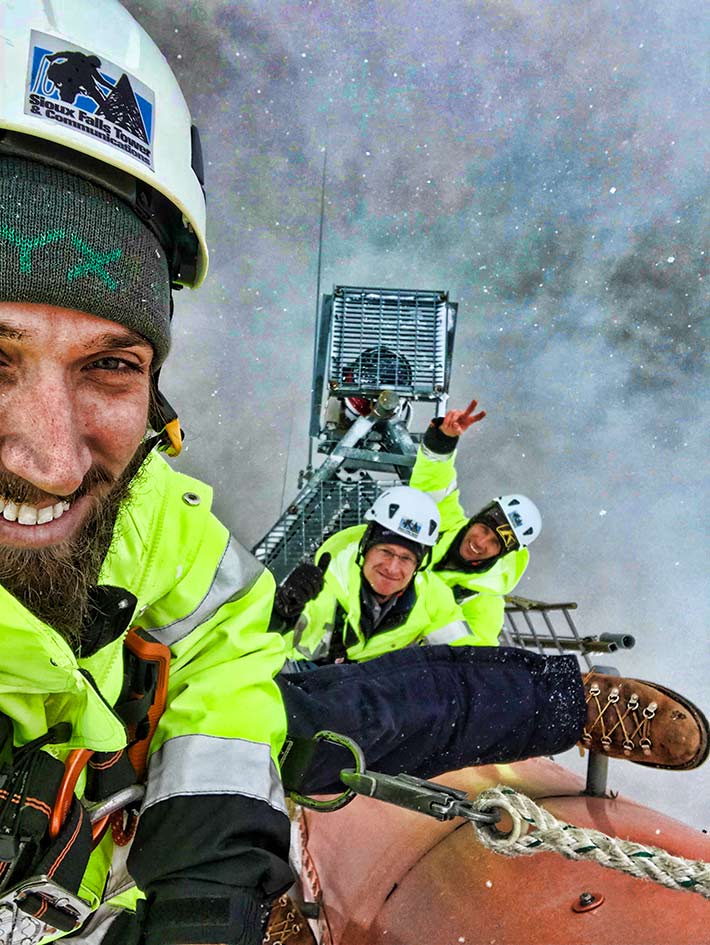 Safely chaperoning FCC Commissioner Brendan Carr’s ascent on an antenna atop a 2,000-foot tower are Ammon Snyder , at left, and Mike Young below. The techs had to chip off ice to ensure a safe climb.

FCC Commissioner Brendan Carr on Friday conducted a site visit to the KDLT TV broadcast tower located near Rowena, S.D. and climbed the top portion of the 2,000-foot tower.

On Thursday, it was an almost balmy – for South Dakota – 50 degrees. But when Carr arrived on site it was 30 degrees and snowing.

During his site visit, Carr, accompanied by experienced technicians from Sioux Falls Tower & Communications, was fitted with the appropriate fall protection equipment and ascended near the top of the tower utilizing the structure’s elevator, a 20-minute ride.

However, before he started climbing an off-line antenna that is scheduled to be exchanged for a new antennae for the repack in a week or two, Sioux Falls’ techs had to chip away ice to ensure a safe climb.

While on the tower, Carr received valuable information on the type of repack work that is currently taking place on tall towers around the country.

The visit was focused on providing an update on the progress of the broadcast repack transition that the National Association of Tower Erectors’ broadcast contractors are involved in.

In May, Carr received an enlightening Cook’s tour of tower site work, following it up later in the month climbing a monopole. In August, FCC Chairman Ajit Pai also put boots on the steel and climbed a 130-foot cell tower in Colorado.

“NAB appreciates the efforts of NATE to educate the FCC about the challenges faced by tower crews and broadcasters to uphold this commitment. We thank Commissioner Carr for visiting a broadcast tower site and experiencing first-hand the work of NATE and local broadcasters to complete the incentive auction repack safely, under budget and on schedule,” added Smith.

“It was great to collaborate with some of our member companies and friends at NAB to host this event. During this meeting and site visit, Commissioner Carr was able to witness our member companies’ resolute commitment to providing the resources necessary to ensure this broadcast repack transition work is conducted safely and efficiently.”