OSHA Directorate of Construction Dean A. McKenzie,62, passed away Nov. 4, 2018, in Maryland after a year-long battle with cancer. 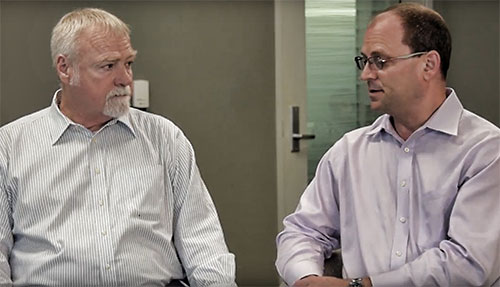 Dean McKenzie, left, and Scott Kisting discuss telecommunications standards. McKenzie took an active role in creating a greater dialogue between his agency and the industry.

He shepherded the rule up until the point he became seriously ill, said Scott Kisting, Vice President of PTS Advisors.

Kisting, who frequently interfaced with McKenzie as a subject matter expert, became good friends over the years and he said that McKenzie had a great deal of respect for those championing industry safety.

“We talked very often towards the end, and right up to the last day we were discussing the good people in the industry and the respect that Dean had for them,” Kisting said.

“Dean was a good friend and a regulator that sought to learn and understand the environment. He had a heart for craftsmanship and truly believed the key to a safe work environment was performing work in a quality manner. He worked to support the telecommunications industry, seeking to understand while endeavoring to be understood,” Kisting said.

“On behalf of the 18 members of the NATE OSHA Relations Committee, I would like to say how deeply saddened we all are at the loss of Dean McKenzie,” said NATE Board Member John Paul Jones.

“The committee worked with Dean and his team during many pivotal issues over the years such as the Wireless Safety Task Force which led to the development of the National Wireless Safety Alliance and the ongoing development of the NATE-FCC-OSHA Partnership. Dean was highly respected and was always reciprocal in his respect for all of us. He wanted the same thing the rest of us want, to protect our workers at height and bring them home safely to their families every night. He will be sorely missed,” Jones said.

McKenzie served as director of OSHA’s Office of Construction Services from 2012-2013, then became the deputy director in 2013, and was promoted to the position of acting director in 2016.

Later that year he was appointed by then OSHA Secretary of Labor Dr. David Michaels as the agency’s Directorate of Construction.

“Dean has been a valuable member of the OSHA team,” said Michaels in making the announcement. “I congratulate him on his new position and I am confident he will continue with his forward thinking and innovative leadership in DOC.”

In his nine years with OSHA, McKenzie accomplished many things, including addressing fatalities in the communication tower industry, building a strong relationship with the Advisory Committee on Occupational Safety and Health, and taking a lead role in the Stand Down to Prevent Falls in Construction campaign.

With more than 40 years of experience in the field of construction, McKenzie had an exceptional understanding of the safety and health issues facing the industry.

He started out in the steel mills of Gary, Ind., as a journeyman millwright in the mid-1970s. McKenzie worked in construction, particularly industrial, in Indiana, Florida, Colorado and the Caribbean. He had been a licensed general contractor, business owner, and project and operations manager.

Dean is survived by his wife Joyce, his mother Lane, sister Debbie, brother Paul and many aunts, uncles, cousins, dear friends and co-workers.

A celebration of life service will be held Monday, Nov. 12th at Fellows, Helfenbein & Newman funeral home in Chester, Md. where friends and family may gather starting at 10 a.m.

Not a flower guy, Joyce said, Dean would have preferred a donation to Chesapeake Dogs and Cats (Tree of Life Sanctuary), 326 Wye Mills Rd, Queenstown. Md. 21658, in his name.