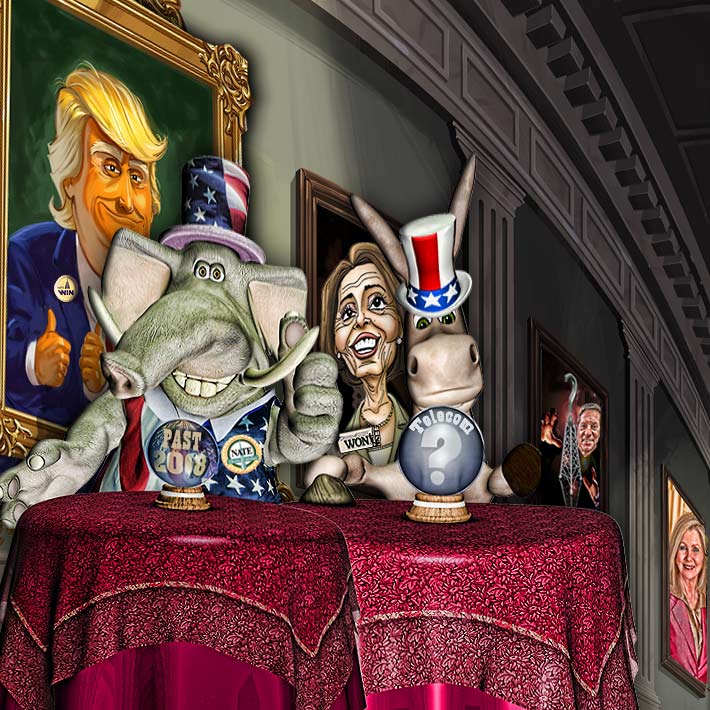 Analysts looking through their crystal ball believe that if House Minority Leader Nancy Pelosi (D-CA) ascends to the Speaker’s chair, a position she held in 2007-11, she would explore leading a bipartisan effort directed towards infrastructure development which would include broadband initiatives. President Trump said yesterday that he and Pelosi can work together to get a lot done. The National Association of Tower Erectors (NATE) said it is encouraged by Tuesday’s election results since their lobbying efforts have always been bipartisan.

Wall Street’s bulls were cheering midterm election results yesterday that saw Democrats on Tuesday take control of the House and Republicans hold control of the Senate, delivering a split Congress and prospects for legislative gridlock over the remaining two years of President Trump’s term. Today, enthusiasm was a little subdued and the market remained flat, although the communications sector was up 4.3% at noon.

However broadband builds could get a bounce as Democratic leaders have been recently discussing the need to work on America’s infrastructure, and yesterday President Trump said he will work with House Minority Leader Nancy Pelosi (D-CA). He also supported her ascension to the Speaker’s chair, a position she held in 2007-11,

The National Association of Tower Erectors (NATE) said yesterday that it is well-positioned to work with both sides of the aisle with Senators and Representatives “who serve on the committees with jurisdiction over our policy issues.”

“NATE has developed great rapport with Senator-elect Blackburn and she has been a champion for industry priorities such as rural broadband, streamlining the deployment of wireless infrastructure and workforce development. NATE believes Senator-elect Blackburn would make a natural fit as a new member of the U.S. Senate Committee on Commerce, Science & Transportation,” Schlekeway said.

The Association’s lobbyist, Jim Goldwater, Senior V.P., Bob Lawrence and Associates, also agreed that her victory was very good news for the entire communications industry.  He noted that NATE officials have met with her and her staff on several occasions.

Blackburn was honored as the inaugural recipient of the NATE Legislative Champion Award last February at NATE’s annual conference where she was a keynote speaker.

Blackburn chaired the House Energy and Commerce Subcommittee on Communications and Technology in the 115th Congress. NATE Chairman Jim Tracy testified before her panel on the broadcast repack and workforce shortages in the industry.

The panel was extremely interested in Tracy’s comments, and has been very active on a wide range of matters of interest in the industry.

“Of course, there is no way of knowing as yet what her committee assignments will be in the 116th Congress. Having said that, I suspect that, given her experience and expertise, she might serve on the companion subcommittee in the Senate Commerce, Science, and Transportation Committee,” Goldwater informed Wireless Estimator in an interview today.

“We are extremely confident that her vast experience and expertise as the most recent chairman will prove invaluable to us in the months and years ahead. We look forward to continuing to work with her and her staff on matters of importance to NATE,” said Goldwater.

Goldwater said there was more good news with the reelection of her counterpart on the Senate side, Sen. Roger Wicker (R-MS), who will continue as chairman of the Subcommittee on Communications, Technology, Innovation, and the Internet. Goldwater said Sen. Wicker will play a critical role in efforts to expand broadband.

“Sen. Maria Cantwell (D-WA), who also was reelected this week, will be another key player in communications policy. She is expected to become the ranking member of the Senate Commerce, Science, and Transportation Committee, where she also will be well-positioned to assist on another NATE priority, unmanned aerial systems, as a member of the Subcommittee on Aviation, Safety, and Security of which Sen. Wicker is also a member,” said Goldwater.

Rep. Kevin Cramer’s Senate win in North Dakota brings another strong proponent of unmanned aerial systems to the upper chamber, according to Goldwater.

“Sen. John Barrasso (R-WY), another winner on Tuesday, will remain chairman of the Senate Environment and Public Works Committee, which is expected to renew the push for a major infrastructure initiative. For several years, NATE has advocated that any federal infrastructure legislation must include funding to expand the nation’s vital communications capabilities, including broadband, so he will be quite important on this subject.”

Goldwater said over in the House, NATE was very pleased with the reelection of Rep. Dave Loebsack (D-Iowa) and Markwayne Mullin (R-OK), who cosponsored a bill that would provide funding to train communication tower and wireless workers at community colleges and technical schools.

“Workforce development is a top priority of ours, and funding made available through this type of legislation can play a critical role in recruiting and training a pipeline of future workers at the community and junior college level,” Goldwater said.