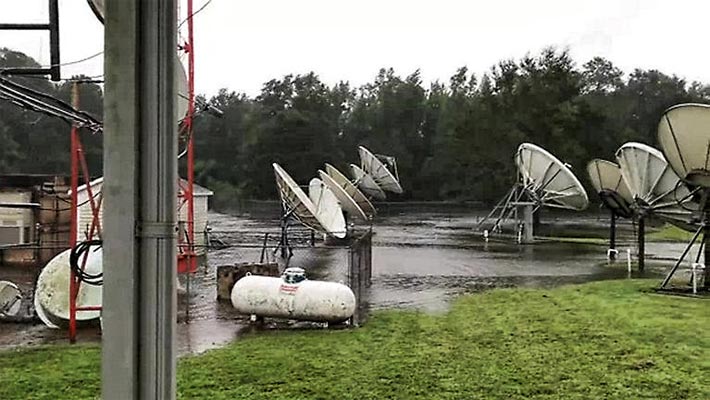 WCTI-TV NewsChannel 12 employees in New Bern, N.C., were forced to evacuate due to Hurricane Florence. While broadcasting  stories about rising waters their studios started filling up with water.

According to the FCC’s Disaster Information Reporting System (DIRS) report for Sept. 16, 2018, 13.6% of North Carolina’s cell sites are out of service as a result of Hurricane Florence, down from Saturday’s 18.4%, but rising flood waters are seeing some counties’ outages rising.

Although the agency’s out of service cell site numbers are the best information available, they don’t necessarily paint a true picture since it’s a county-by-county snapshot in time that can change dramatically within an hour or two since any inability to transport information between the cell site and the switch is reported as a failed cell site. Plus the averages include counties that have no outages since they weren’t severely threatened by Hurricane Florence. 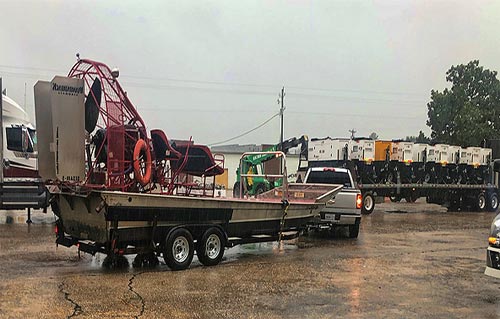 CB Towers readies generators for cell site deliveries and hookup. The company has been dealing with severe flooding in many deployment locations.

Carriers voluntarily provide the FCC with site information, such as whether it was an MSC failure, a power supply issue or damage. However, in an agreement struck with the carriers, they will not release that data, only providing the public with total cell site outage numbers.

Since many sites do not have backup power supply generators, contractors last week were marshaled outside of the hurricane’s expected impact area with many hundreds of generators that would take over for battery backup systems that might last four or six hours once power has been lost.

However, catastrophic flooding in North Carolina is seeing some county outage totals rise since logistics crews can’t reach the sites or resupply fuel for the typical supplemental 45kw to 55kw generator that might run anywhere between 24 and 48 hours, according to Chris Howell, co-owner of CB Towers.

On Friday, CB Towers, with marshaling facilities in Irwin, N.C. and Orangeburg, S.C.,  had already put in place and hooked up 49 generators. 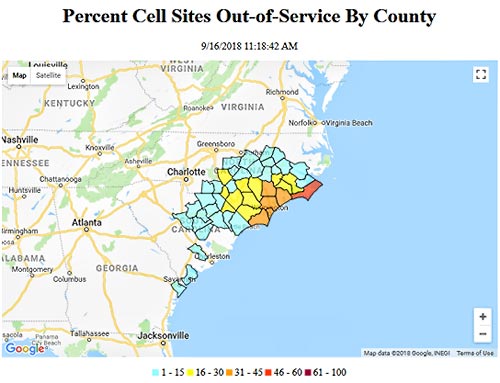 But by last night, rising floodwaters, had the company reassessing their generator deployment plans.

Heavy flooding in Brunswick and Carteret Counties may be the reason that the two counties had the highest increase (see below) in the number of cell sites out yesterday from Saturday, with an increase of 32% and 30% respectively.