Carriers frequently extol the skills of their purported in-house talent pool required to build out 5G or manage restoration efforts following hurricanes, but in most cases, those workers are from industry infrastructure contractors. 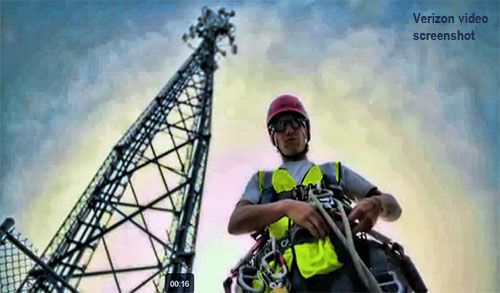 Although this tower climber in the Verizon commercial is purported to be a Verizon engineer, it’s likely that he’s not. Even if he is, the advertisement depicts the carrier as self-performing all of their installation work.

Last month, Wireless Estimator pointed out that in a Sprint promotional video CEO Michel Combes said that Sprint was going to be successful because of “Our people that you see in the field which are working days and nights in order to meet our schedule.” 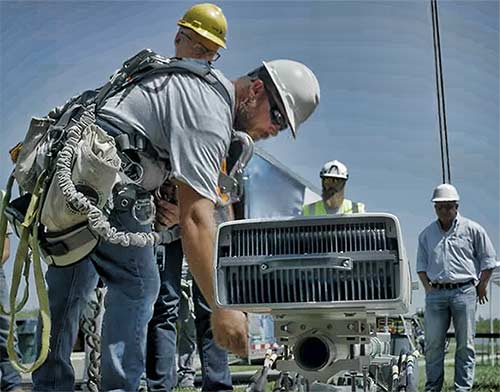 A True North Management technician prepares for a sector pick as Sprint CEO Michel Combes watches in the installation. The video inferred that True North’s employees were Sprint workers.

Those professionals in the video were not Sprint employees but tower technicians from True North Management Services, LLC of Fenton, Mo.

Like Combe’s Sprint promo, Paleski said the ad infers that Verizon’s engineers climb the towers and install the equipment.

“The ad closes with the image of a Verizon ‘engineer’ climbing a tower to install equipment. No thanks, and no credit to all of us who actually do the work. Total disrespect,” Paleski said.

Paleski, who has been doing Verizon installation projects since they were NYNEX Mobile in 1986, said, “During these 32 years, the tower industry has lost so many good and hard working men and women due to injury and death. We face these challenges on a daily basis. Verizon, on the other hand, has faced none of these challenges – no injuries, no deaths. They do no such work as claimed in their commercials. They hire us to do it instead.”

Verizon engineer Niki Palmer narrates the commercial. Although she doesn’t don any PPE or climb the tower, she uses the collective “we” for those climbing and performing Verizon’s installations as well as their DAS installs.

However, as the industry is aware, it’s infrastructure contractors that have and will continue to make Verizon successful.