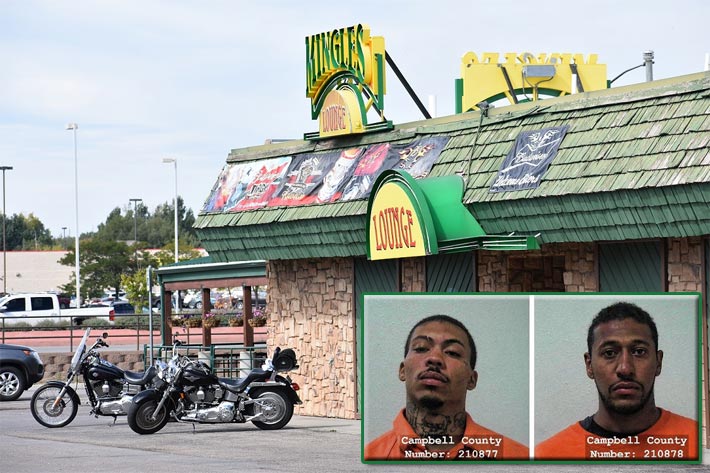 Two tower techs were arrested early Saturday morning after they allegedly shot a man outside of Mingles Lounge, a popular night spot off of South Douglas Highway in Gilbert, Wyo.

Authorities did not respond to a request from Wireless Estimator for Jones and Broach’s employer.

Their report states that the two men arrived in Gillette at about 11 p.m. Friday along with their boss and another co-worker, Tristen Walker, who were supposed to start work installing a cell tower.

When police fanned out and found D’Marco Jones at the Fairfield Inn, he jumped out of the third story window and was captured after a short chase

After checking in at the Fairfield Inn and Suites, Jones, Broach and Walker went to Mingles Lounge, about a quarter of a mile away from the hotel.

A fight broke out in the front parking lot, and they joined in, with Jones and Walker describing it as trying to break up the fight until they became the target of punches.

According to the affidavit, during the fight, a woman, who was believed to be the daughter of the later to be identified gunshot victim, pulled a gun on them, telling them to “leave,” followed by a racial epithet.

The three techs went back to their hotel, but then they got into a physical fight in the hotel parking lot because Broach and Jones wanted to “go deal with it,” according to Walker’s statement. He said he tried to prevent that from happening.

Broach went to his room and retrieved a semi-automatic handgun, which Jones took from him, according to the affidavit.

Broach said he walked back to Mingles with Jones, trying to calm him. Broach said he gave up and was walking back to the hotel and was about a block away when he heard shots. He told Gillette police he ran back to his room.

A woman said she was standing near the front entryway of Mingles five to 10 minutes after the physical fight in the bar parking lot when she heard shouting and someone yells “bitches” from across the road and then heard gunshots, according to the affidavit. Detectives recovered 14 spent 9mm casings from the middle of the street.

“I’m hit,” the victim told her. The bullets struck a parked vehicle, the building, and the 51-year-old man, who began banging on the locked door to the bar asking for help.

According to the affidavit, prior to the fight, one bar patron was reportedly harassing Broach and Jones and trying to fight them.

During most nights Mingles doesn’t have many African Americans from the community that is only 1% black. Jones and Broach are black men.

Following the shooting, police searched for the suspects and were informed by staff at the Fairfield Inn that individuals matching the descriptions were occupying rooms on the third floor.

Hotel residents were evacuated and officers ordered Broach and Jones out of room 326. The affidavit states that Broach claimed he wanted to open the door, but Jones wouldn’t let him.

Jones later stated to officers that he had been shot before and he did not know that it was the police who were banging on the door. Broach opened the door for police, at which time Jones picked up a chair, broke out the window, and jumped to the ground below. He was taken into custody following a short foot pursuit.

Police tagged Jones with an additional charge of felony for destruction of property for the broken window, which is valued at over $1,000. He denies going to the bar with a gun and shooting the 51-year-old man.

Jones’ charge, felony attempted first-degree murder, is punishable by death, life imprisonment with or without parole, and a $10,000 fine.

Broach’s charge of conspiracy to commit first-degree homicide is punishable by 10 years imprisonment, a $10,000 fine, or both.