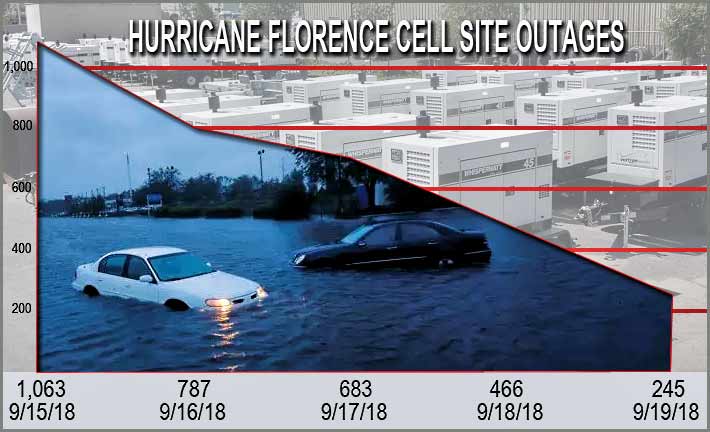 Utility workers are frequently featured in news articles for their restoration efforts. Tower technicians are seldom given the credit they deserve.

When Hurricane Florence’s full tally of cell site outages was identified in North Carolina on Sept. 15, tower crew restoration companies had already been servicing many of them, and the 1,063 outages were reduced dramatically to 787 the following day.

Restoration efforts in North Carolina have brought the total of sites out of service to just 245, a 77% improvement from only four days earlier, according to the FCC’s Disaster Information Reporting System (DIRS) report for Sept. 19 (details below).

Some of the sites became operational when Duke Energy and other utility repair crews supplied service to affected areas, but the majority of restorations were through fuel resupply, generator installations and other efforts of the men and women that also entered harm’s way – wireless infrastructure tower technicians.

Prohibition on providing recovery photographs
Prior to Hurricane Florence making landfall, four contractors informed Wireless Estimator that they would provide a steady stream of pictures chronicling the industry’s efforts.

However, all of them were emphatically told by their carrier and other clients that they could not provide photographs to the media.

And although one company had sent Wireless Estimator five unsolicited photographs of flooded cell sites, just before they were published they frantically emailed and called to request that they  should not be used since their customer might be able to identify who sent them.

But company owners and techs continued to update Wireless Estimator on their progress with site restorations, many of them describing the widespread flooding that they are still faced with in some areas.

A contractor said that one of his crews had to be rescued with a high water vehicle when the surrounding area near a cell site they were at blocked them from leaving.

Technicians have often been working almost around the clock, with most days requiring at least 16 hours.