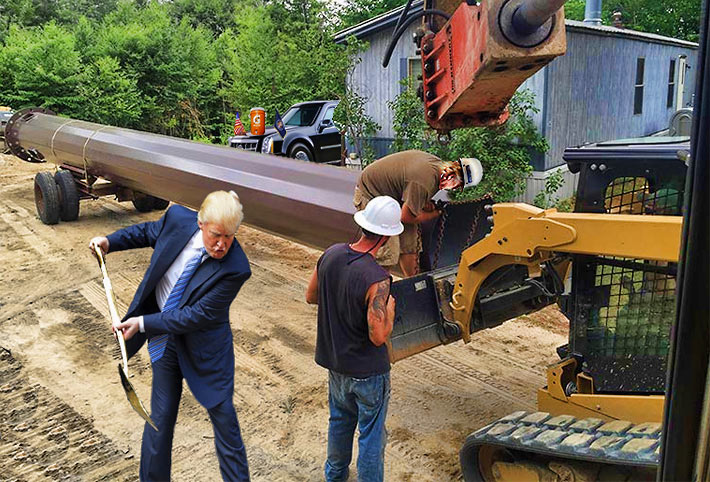 The White House today released President Donald Trump‘s long-sought infrastructure plan that includes $200 billion in federal funding for the next 10 years with the end goal being to incentivize another $1.3 trillion in local investment to rehabilitate the nation’s roads, bridges, tunnels, and to expand broadband.

Whether any of the $100 billion in direct grants to local governments will end up being earmarked for telecommunications projects is unknown, but some of the items in the package would affect additional investment as siting is accelerated.

“It provides $50 billion dollars for rural infrastructure who have really been left out. The rural folks have been left out, including broadband internet access which they don’t have. And they want it, and the farmers want it,” President Trump said in announcing the plan this morning.

The plan lists broadband (and other high-speed data communication conduits) as being an eligible asset class under the Rural Infrastructure Program.

Current law includes a limited list of exempt facilities eligible to be financed with tax-exempt bonds, such as airports and water facilities. The plan will provide a modified category for rural broadband service facilities.

The plan will also increase efficiency by expediting certain small telecommunications equipment in NEPA and the National Historic Preservation Act. However, President Trump had previously announced that he was going to initiate these actions to speed up broadband development.

Current law requires that wireless deployers comply with both NEPA and the National Historic Preservation Act (NHPA) for small cells and Wi-Fi attachments in the same way that they obtain permits for large towers.

Amending the law to expedite small cells and Wi-Fi attachments in NEPA and the NHPA would eliminate unnecessary reviews without adversely affecting the environment.

The National Association of Tower Erectors (NATE) provided the following statement upon the release of the President’s infrastructure initiative.

“The principles outlined in the administration’s initiative such as prioritizing broadband as a vital part of infrastructure, new infrastructure investments into rural America and reducing regulatory barriers to deploy infrastructure are issues that NATE has advocated for years and will greatly benefit American citizens. NATE member companies and the entire wireless ecosystem stand ready to work to deploy and maintain new communications infrastructure in all corners the United States,” added Schlekeway.

“President Trump’s infrastructure proposal contains a number of important provisions that will pave the way for the next generation of wireless communications. The plan calls for the establishment of a ‘one agency, one decision’ environmental review structure, which would eliminate many of the inefficiencies companies face when building out mobile networks. The plan also calls for the reduction of duplication in using categorical exclusions, lowering the cost and time of wireless broadband buildout.

“I am also pleased that the plan adopts an approach for federal lands along the lines recommended by the FCC’s Broadband Deployment Advisory Council, the working group I chaired on this topic. By taking these specific steps to encourage private investments and to reduce barriers to the deployment of the wireless networks, the White House is positioning the U.S. to lead the world in mobile connectivity and the deployment of 5G networks.”

ITTA – The Voice of America’s Broadband Providers gave the plan a lukewarm reception.

ITTA President Genny Morelli said, “While ITTA recognizes that streamlining the federal permitting process for broadband projects on federal lands is needed and represents a good start, it will not move the needle substantially for those millions of rural American consumers waiting for broadband speeds that will ensure connectivity for years to come. ITTA looks forward to working with Congress to craft an infrastructure package that provides greater promise for the deployment of broadband throughout rural America.”

Democrats have already come out against the plan, saying the private-public partnerships are a “scam” designed to enrich private contractors.

“This is not a real infrastructure plan — it’s simply another scam, an attempt by this administration to privatize critical government functions, and create windfalls for their buddies on Wall Street,” Rep. Peter DeFazio, the top Democrat on the House Transportation Committee, said.

The Trump administration in the past has said it wants to shorten the time and expense of getting federal permits by consolidating the reviews conducted by different agencies into “one federal decision,” with one agency taking the lead on evaluating a project.