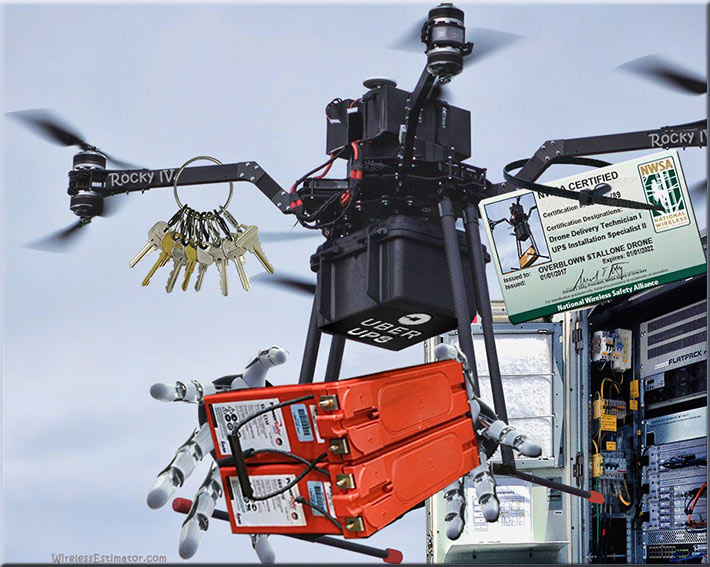 Commentary –
Unmanned aerial vehicles (UAV) are assisting the wireless infrastructure industry with great tower mapping, 3D modeling, close-out documentation and other capabilities that have proven in some cases to be more accurate and safer for the workforce. 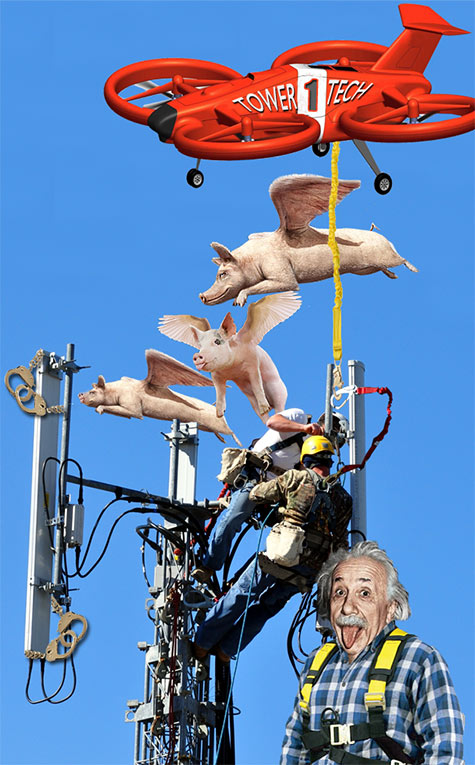 However, a recent patent application for a UAV is so technologically advanced that the applicant’s inventors will inevitably displace tower techs that service cell site batteries – when pigs fly alongside the drone.

The summary says that the UAV would fly to the cell site location and would then begin the task of “inserting the one or more batteries in a battery system for powering thereof.”

The applicant is sparse on any detail as to how the UAV would call the NOC, verify that it indeed is a credentialed drone with the proper passcode, and be able to use one of its two mechanical arms to select the appropriate key from its custom-molded tethered key chain and open the high-security cabinet lock.

Then it would be required to terminate the power supply, slide out the drawers, disconnect the power terminals, remove the existing batteries, connect the new cells and ensure that all alarms are cleared.

The patent application, available here, is a continuation of multiple other patents filed by ETAK which include using magnetic mounts on antennas in order for the UAV to attach them to a mounting frame, or they state that automatic locking clamps “similar to handcuffs” can be used.

The application is silent on how the UAV would achieve proper alignment once the antenna is handcuffed behind its back.

Tower climbers to get new PPE, Personal Propulsion Equipment
The patent application also describes how a single person propulsion system can be adapted to transport a tower climber safely and quickly up a cell tower.

And if for any reason the first drone drags up and flies away in the middle of the day for $1.18 more an hour and a big-buck battery as a sign on bonus, and their recommended second drone on site is on break or is still high from an all-night ascend bender, the application says it’s not a problem, since they have done a study that concludes that climbing down “is quick and does not exhaust the same amount of physical resources.”

ETAK states in its application that “a time study was performed which showed the process of a tower climb takes well over an hour, including suiting up with gear, climbing the cell tower, clicking in and out of safety harnesses along the way, etc. Also, maintenance personnel are exhausted at the end of the tower climb.”

They’re certainly correct. Even a green bean will acknowledge, “clicking in and out of safety harnesses” is exhausting. Isn’t one PPE harness enough? 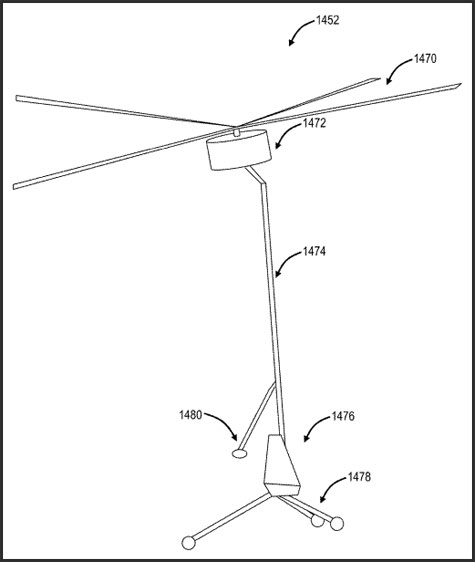 In this fully detailed and highly technical drawing in the patent application of the tower climber’s personal propulsion drone, “the drone 1452 includes a single set of rotors 1470 connected to a motor 1472 which connects to a support member 1474 which extends for a distance and connects to a base 1476. The base 1476 can support maintenance personnel through harnesses, a vest, or a seat. The base 1476 can connect to landing members 1478 which support the drone 1452 on the ground. A control system 1480 extends from the support member 1474 for control of the drone.”

What they fail to mention is that the climber using his personal propulsion drone would still have to “suit[ing] up with gear.” Plus, the tie-off system would have to meet the Z359 fall protection and arrest standard for drones at rest or in flight – which don’t exist for UAVs.

They also state that the tower should have various “fixed or removable platforms for the drones or the like to place the personnel and for the personnel to get back in the drones to fly back to the ground.” They explain that the drones could install the platform using their ever-popular bedroom bondage handcuffs connectors.

However, the inventors make no mention as to whether the drone is required to be a competent rigger and carry on every flight its NWSA certification card.

The personal propulsion drone for tower climbers might be obsolete three years from now since  two years ago in a news article in RCR Wireless News, ETAK Systems CEO Lee Priest said, “We will take tower climbers off the towers. That’s our goal and we expect it to fully occur within five years. We are also looking at remote robots that can climb towers. They can use the safety climb as well as the pegs to get up towers.”

The wireless infrastructure patent application is sneaking in one sentence that along with their other embodiments will surely sound the death knell for Triple-A: “UAV can be configured to bring a battery to a stranded vehicle which requires a ‘jump’.”