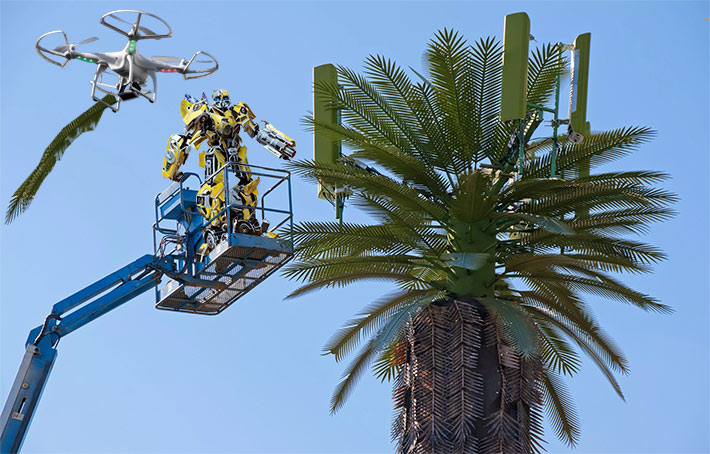 Commentary –  If you believe an executive from drone services provider ETAK Systems, 29,000 tower climbers in America should start training for another avocation – immediately. Safety training companies should shutter their doors. Bye, bye Exofit. OSHA, eighty-six any new regulations. And TIRAP, NWSA and NATE, it’s been nice knowing you.

In a news article in RCR Wireless News, ETAK Systems CEO Lee Priest said, “We will take tower climbers off the towers. That’s our goal and we expect it to fully occur within five years. We are also looking at remote robots that can climb towers. They can use the safety climb as well as the pegs to get up towers.”

It is as if those comments would come from someone who had been chewing on high grade Yemen Khat for a couple of days while washing it down with Rio de Janeiro water laced with bacteria laden stupid pills cloaked in tinfoil hats.

It’s likely that Priest, who has an industrial engineering degree and an MBA from Harvard Business School, and runs a medium-sized self-performing DAS and small cells as well as new builds business, doesn’t even know about any of those enjoyments, but it’s clear that he does traffic in delusional drone and robotic fantasies.

But there is still hope for NATE if it can reinvent itself as a new advocacy group, All Robot Lives Matter, since robots will be dropping off towers quicker than Grant took Richmond when their cute little alloy appendages can’t find or adapt to a missing step bolt and they’re unaware that the last robot that installed the safety climb spent the night before in a decrypt club ogling pulsating PCI slots.

Drones will have a solid future in the industry as they are used to map towers and inspect them to minimize repetitive climbs. There may be other opportunities where drones will be used in lieu of setting up cells on wheels as detailed recently by AT&T.

But to believe that they and robots with screw on body harnesses will replace tower technicians within the next five years is an incredibly irrational premise.

The RCR article can be read here.