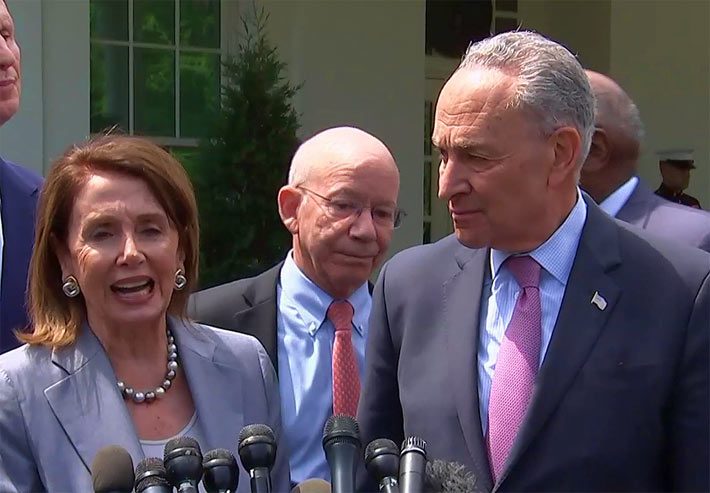 The wireless construction industry could get a welcomed shot in the arm since broadband is expected to be part of the $2 trillion spending plan on infrastructure that President Donald Trump agreed to in a meeting with Democratic leaders today after he met with House Speaker Nancy Pelosi and Senate Minority Leader Chuck Schumer at the White House to begin discussions about a long overdue infrastructure spending plan.

“We agreed on a number, which was very, very good: $2 trillion for infrastructure,” Schumer told reporters outside the White House. He said that the discussions had a major emphasis on broadband.

“Originally we had started a little lower, even the president was willing to push it up to $2 trillion. And that is a very good thing,” Schumer said.

It was a rare moment of bipartisanship in Washington. Pelosi had asked for the meeting with President Trump to discuss the introduction of the ambitious building program.

NATE champions bipartisan efforts
“As a trade organization representing over 880 member companies who build, deploy and maintain the wireless networks and broadband infrastructure of this nation, NATE was heartened by today’s developments that a bipartisan infrastructure package could be unveiled during the 116th Congress. NATE was also pleased that broadband funding would reportedly be included in the package as the Association has long advocated in our meetings on Capitol Hill and with Administration officials that communications infrastructure must be included in any national infrastructure initiative,” said NATE Executive Director Todd Schlekeway.

“While much work needs to be done in order to move this initiative forward, including identifying appropriate funding mechanisms, NATE is committed to communicating the importance of passing a national infrastructure package to lawmakers on both sides of the aisle,” Schlekeway said.

One area of funding could come from an increase in the federal gasoline tax which is currently 18.3 cents a gallon

“Rebuilding America’s infrastructure is a national priority and must include not only strengthening our bridges and roads, but a commitment to broadband deployment in unserved areas of the country. Our economy and continued global leadership depends on it,” said Jonathan Spalter, president and CEO of USTelecom.

“What we need: A muscular, serious infrastructure bill that narrows the digital divide, supports broadband deployment, modernizes networks and gets all American families, communities and enterprises everywhere connected to the internet. Any infrastructure plan should future-proof new infrastructure with fiber capabilities so new technology can be integrated and modified as years go by. Smart, connected solutions should be an integral part of every mile of American infrastructure constructed or reconstructed in the coming years,” Spalter added.

On April 12, 2019, at a meeting with President Trump, FCC Chairman Ajit Pai announced that the FCC is moving forward to develop a $20 billion Rural Digital Opportunity Fund over the next 10 years to subsidize eligible companies to build out broadband infrastructure in underserved areas.