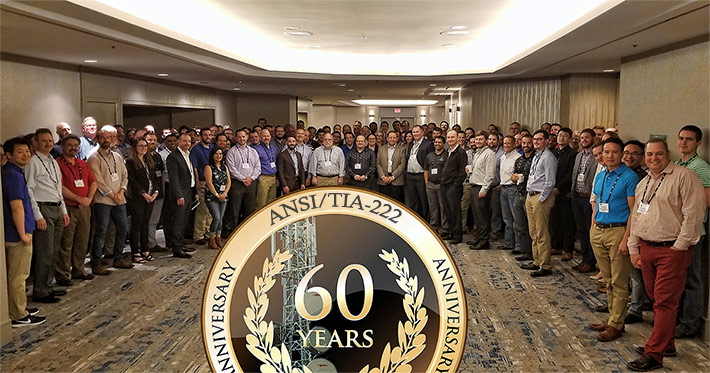 This year, TIA is proudly celebrating the 60th anniversary of providing guidance in the structural design and fabrication of communications towers with their engineering standard ANSI/TIA-222, Structural Steel Standards for Steel Antenna Towers and Supporting Structures.

The ANSI/TIA-222 standard is well known among those who build new communications towers or modify old structures, but for those that may be less familiar, here is a brief history into this important standard that has been and continues to be a foundational piece to empowering connectivity, said TIA Vice President, Standards David Bain. 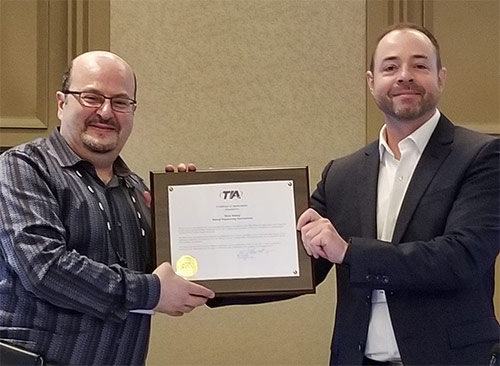 In 1959, EIA-RS-222 was established as a revision of TR-116 and RS-194. It was a 12-page document developed by the TR-14 engineering committee on Microwave Relay Systems for Communications. EIA-RS-222 was developed to provide a uniform method of specifying and calculating tower designs which applied to steel transmitting antennas and supporting towers.

As taller towers (up to 2,000’) became widespread in the 1980s, a new revision of the structural standard EIA-RS-222-C was released and integral to the tower community. It took into account new information about tall towers which supported broadcast antennas. Effects of wind and icing became more apparent and were addressed in later editions of the standard (Revisions D, E & F) as well.

Revision G was introduced to the industry in 2006 and brought the most sweeping changes. It was the most comprehensive tower standard to date. Design philosophy changed to limit state design from allowable stress design. It also considered topography that affects a structure’s performance with respect to wind as if atop a hill or mountain. TIA-222-G also expanded the safety requirements, received international recognition and was referenced in the International Building Code and adopted for use as a base code standard by most jurisdictions in the United States, Bain said in his TIA post.

In October of 2017 the latest revision of  ANSI/TIA-222-H was released under the direction of 15 leaders of various Ad Hoc groups. Revision H enhanced the provisions of Revision G, kept the standard up-to-date and moving forward in addressing the industry’s needs, and most importantly included items that no related tower standard has previously addressed, making it a unique and vital resource.

TIA-222-H provides the industry with critical guidance regarding minimum load requirements and design criteria. As telecommunications providers place more and larger equipment on many towers, it was critical to address the need for them to be structurally modified to accommodate the loading increase. More specifically, Revision H addresses the requirements for the structural design and fabrication of new, and the modification of existing antenna supporting structures, antennas, small wind turbine supporting structures, appurtenance mounting systems, structural components, guy assemblies, insulators and foundations.

The widespread deployment of mobile broadband networks, including next-generation 5G networks and other wireless infrastructure, has provided for new tower structures to become even more ubiquitous.