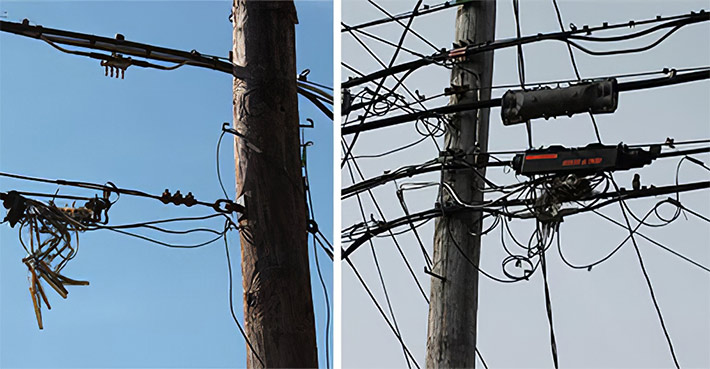 AT&T copper cable—for many the only source of landline phone and Internet—is significantly damaged, creating service problems for customers and public safety hazards, according to the CWA. Photo: CWA

AT&T will be cutting 1,800 positions, according to the Communications Workers of America (CWA), union jobs in their wireline business, which the company claims has fewer customers after losing 1.9 million wireline customers between 2016 and 2018.

“Due to changes as our business and industry continue to evolve, we are making some staff reductions involving technicians who install and repair certain services and network systems,” said AT&T spokesman Marty Richter.

However, the CWA said, even without the job cuts, the carrier’s workforce can’t maintain its wireline network.

In a statement, the CWA said new reports based on an investigation that CWA conducted of AT&T facilities in the Midwest serviced by CWA members show that despite making promises to create jobs and invest in rural communities, AT&T is cutting jobs and neglecting rural network improvements.

“AT&T has turned its back on rural and suburban communities in the Midwest by eliminating jobs, advocating for deregulation, and cutting investments in these areas,” said Linda L. Hinton, Vice President of CWA District 4. “We will not stand idly by while AT&T receives billions in tax benefits but turns a blind eye to our nation’s crumbling infrastructure. It’s time for AT&T to provide answers about where all that extra income is going.”