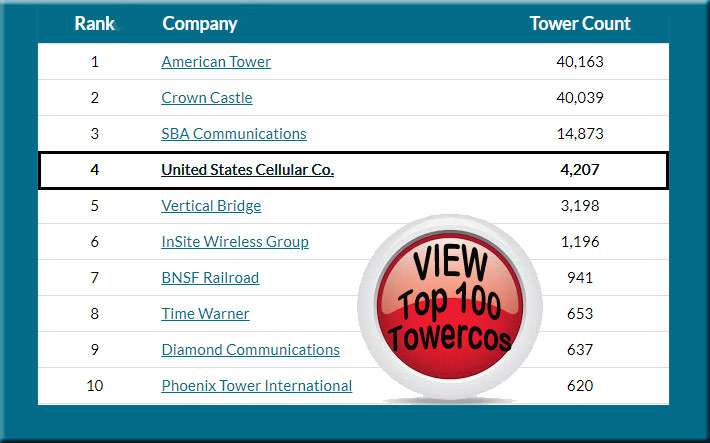 THE LAST CARRIER STANDING – with any considerable count of owned towers – is U.S. Cellular. However, whether they’re worth $713,000 each is questionable.

On June 17 in a note to investors, Morgan Stanley analyst Simon Flannery said if the regional carrier unloaded their strategic portfolio of 4,207 towers in 22 states the possible asking price might be $3 billion, averaging $713,000 per tower. 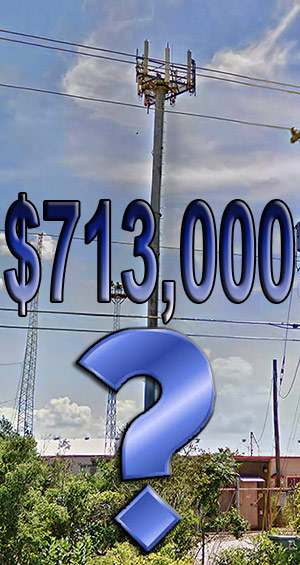 This U.S. Cellular 115-foot monopole was erected in 1992 on West Plank Road in Peoria Ill. The tower’s diameter appears to have limited or no capacity for an additional tenant. Less than a half-mile east on the same road is a Verizon-owned monopole

U.S. Cellular’s stock shot up over $6 to $50.44 the next day after Flannery said it could have a net $2-billion positive impact — about half the company’s roughly $3.9-billion market cap – with shareholders possibly receiving a special dividend that could be worth more than $25 a share, and stockholders of Telephone and Data Systems (TDS) which owns the majority of the company, seeing a little less.

However, Flannery’s $713K per tower could be a little rich for a number of reasons.

He didn’t identify why U.S. Cellular’s book would command a 47% premium, considering that the loading capacity of many of the carrier’s towers isn’t attractive since U.S. Cellular built them to support just their network.

In addition, many of the structures are in locations already being served by the nation’s towercos or carriers such as a small diameter monopole in Peoria, Ill. with U.S. Cellular being the sole tenant, having another monopole owned by Verizon less than a half-mile away on the same road.

Although U.S. Cellular markets their structures to other carriers and telecom providers to collocate on, a possibly low tenant rate per site wouldn’t be attractive to potential suitors.

Clayton Funk, Managing Director at MVP Capital LLC, said he couldn’t venture a guess as to what the carrier’s sites should be valued at, but believes there would be considerable attention to a potential sale.

“U.S. Cellular is the last major wireless carrier to have not sold its tower portfolio. If they were to ever sell, it would be of significant interest to not only existing tower companies, but also – due to the number of towers they still own and potential size of the deal – financial sponsors seeking a domestic platform,” Funk said.

Ken Schmidt, Partner of SteelTree Partners, LLC, said he couldn’t hazard a guess without additional information, and thought $713K per site might be on the high side, but he acknowledged that tower multiples are at historic highs.

Any valuable estimate, he said, would require obtaining U.S. Cellular’s tower cash flow, the number of tenants per tower and the leaseback terms between U.S. Cellular and the acquirer.

Schmidt believes that there could be a number of new potential entrants like infrastructure funds that could see the size of this portfolio as large enough to warrant getting into the industry and who might then overpay.

But the billion dollar question is, will a new player fall through the ceiling tiles and offer $3 billion for a portfolio that a few years ago would have been estimated in value to be less than $2 billion?