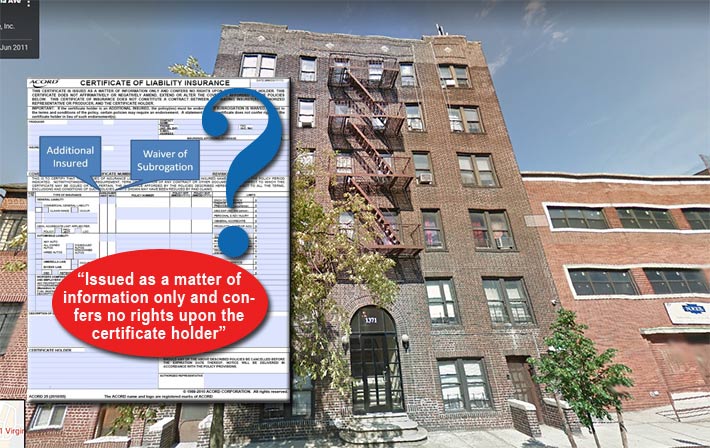 The Washington State Supreme Court’s decision on the validity of an additional insured form will shape how carriers and other clients view the standard Accord form. Although T-Mobile was named as an additional insured, they were denied coverage from their contractor’s insurer when an antenna installation allegedly damaged this apartment building’s roof in the Bronx, NY.

Selective Insurance Company of America (SICA) must cover T-Mobile’s costs in a lawsuit alleging the carrier’s antenna installation contractor damaged a building in the Bronx, NY, a split State of Washington Supreme Court said Thursday, settling a critical issue at the center of a Ninth Circuit coverage dispute that may shape how the standard Accord insurance form is viewed from a legal perspective.

Last November, the Ninth Circuit panel asked the state’s high court: “Under Washington law, is an insurer bound by representations made by its authorized agent in a certificate of insurance with respect to a party’s status as an additional insured under a policy issued by the insurer, when the certificate includes language disclaiming its authority and ability to expand coverage?”

The Supreme Court ruling noted that the agent explained that it began issuing the T-Mobile Additional Insured certificates of insurance because the contractor informed them that its agreements with T-Mobile required that T-Mobile be named as an additional insured under the contractor’s insurance policies and that T-Mobile qualified as an additional insured per the standard terms of SICA’s policies for that reason. SICA never objected to the agent’s issuance of the certificates.

Given those facts, the Ninth Circuit held that the agent acted with apparent authority in issuing the certificate at issue, which “clearly lists T-Mobile USA as an additional insured under the policy.”

But when T-Mobile requested that SICA represent them, they were informed of the COI’s disclaimers that were in bold text and they would not be covered.

The Supreme Court disagreed, viewing the bolded text and agreed with T-Mobile that it was  basically ‘boiler plate’.

Supreme Court Justices Barbara Madsen and Susan Owens dissented, stating: “Certificates of insurance cannot supplant a policy that does not award coverage. Certificates are tools of the insurance trade. They are informational documents only.”

“Certificates do not confer insurance coverage—which is found in the insurance policy itself—nor do they create a contractual relationship between an insurer and an additional insured.”