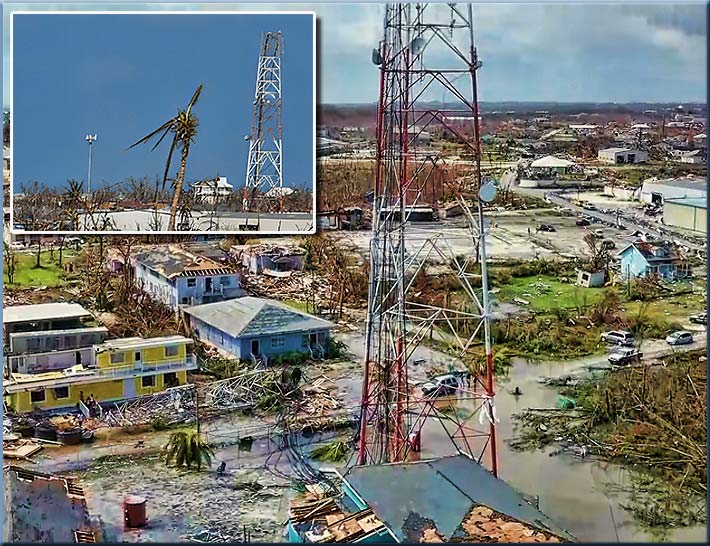 Hurricane Dorian crippled the power grid and many cell towers in the Bahamas, especially Abaco. The self supporting tower above had top sections sheared off, almost landing on a home below it while the monopole at left in the inset photo remained standing. The two carriers in the Bahamas, BTC and Aliv, are required to provide roaming services on both networks to their subscribers today.

Bahama Telephone Company (BTC) and new entrant Aliv are sparing no effort to restore service to their networks after Dorian, a category 5 Hurricane that had gusts of 200 mph devastated many parts of the Bahamas.

As of this afternoon the death toll has reached 50.

BTC’s cell services in many areas of Abaco, Grand Bahama, Berry Islands and Bimini have been spotty or non-existent.

According to C&W Communications, which has donated $500,000 to relief efforts and is a sponsor of the Cable & Wireless Charitable Foundation which can sorely use additional donations, some fixed landlines services are available. In New Providence, mobile and landline services are challenged and due to the loss of commercial power and excessive flooding, BTC customers in the company’s Fiber-to-the-Home and recently upgraded MSAN areas are experiencing landline and internet outages.

BTC said that a team arrived last Wednesday in Abaco and has assessed the damages to the company’s network and they’re instituting restoration.

They’ve activated Cells on Wheels (COWs) in several locations, enabling the company to erect temporary towers and provide mobile services to the more densely populated areas of the island.

Once the COWs are in place, BTC will also provide communication stations, which will allow residents to reach out to family and friends.

In the meantime, the Utilities Regulation & Competition Authority (URCA) has mandated that a national roaming agreement be instituted by today for both Abaco and Grand Bahama, allowing all subscribers of Aliv and BTC to roam on each other’s network.

This will immediately enable every mobile subscriber to utilize all the functioning cell towers of both providers throughout the affected islands and increase connectivity between these affected communities and their loved ones.

BTC and Aliv for the past few days have been testing the temporary fix that will allow BTC customers to roam on Aliv’s 3G network, with no roaming charges levied at BTC for the use of the network for the next 14 days.

BTC has more towers in the Bahamas, and although many of them have been hardened with new generators since Hurricane Matthew, some of the structures were toppled by winds exceeding 195 mph, many of them being collocated on by Aliv.

Since its launch in November 2016, Aliv has been a formidable competitor of BTC and has 147,000 subscribers which is approximately a 37 percent market share. It currently has about 235 cell sites.

It built 160 of its own towers and collocates on approximately 70 of BTC’s towers.

The company has invested heavily in its infrastructure and its backup power. The loss of power will be a key concern for BTC and Aliv, especially after Bahamas Power and Light (BPL) said yesterday that Hurricane Dorian virtually eradicated the power grid in Abaco.

In a press statement, BPL said there are no standing electricity poles along the 16-mile stretch of road from Marsh Harbor to Treasure Cay. 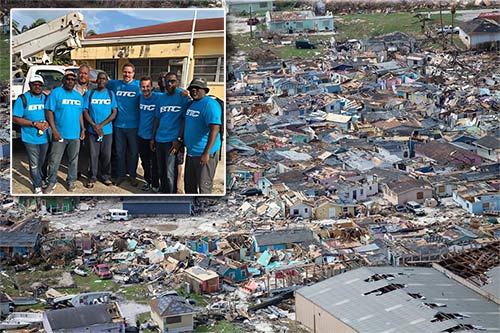 BTC CEO Garry Sinclair said, “We are working hard to come back stronger and rebuild better as we restore our services. I am so proud of all our team members who rallied together and have been working around the clock to lend a hand whenever and wherever it is needed. Some employees in New Providence have also opened up their homes to their colleagues.”

“Our primary concern at all times has been to ensure that all those impacted by this devastating experience are able to get back on their feet and communicate with their loved ones as rapidly as possible. We have pledged to do all that we can to make this happen,” he informed The Nassau Guardian.