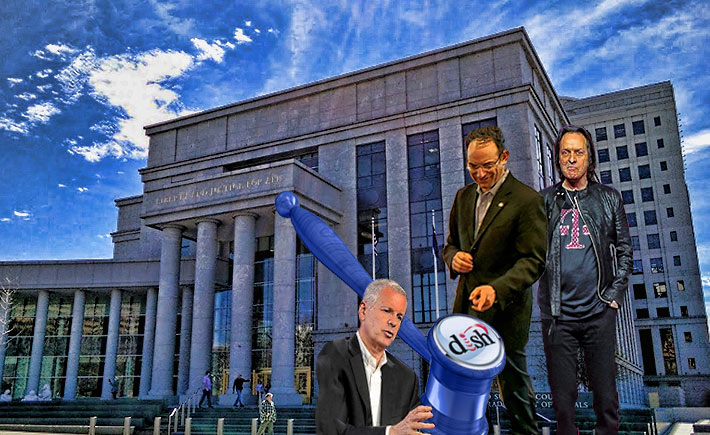 Dish Chairman Charlie Ergen, left, got Colorado Attorney General Phil Weiser to remove the state from the T-Mobile merger lawsuit. Dish faces up to $20 million in penalties if it does not meet its commitments to the state. If T-Mobile defaults on its pledge it will have to pony up $80 million.

The state of Colorado has removed itself from the lawsuit led by New York and California to stop T-Mobile’s $26 billion merger with Sprint. The move follows Mississippi’s recent departure from the lawsuit.

Colorado struck a deal with T-Mobile and Dish Network , which is buying assets divested by the merger.

Dish promised to bring 2,000 jobs to the state and T-Mobile pledged to deploy 5G wireless across much of Colorado, the attorney general’s office said in a statement.

The companies agree to pay up to a total of $100 million if they fail to meet those commitments, $80 million by T-Mobile.

“The State of Colorado joined a multistate lawsuit to block the T-Mobile-Sprint merger because of concerns about how the merger would affect Coloradans. The agreements we are announcing today address those concerns by guaranteeing jobs in Colorado, a statewide buildout of a fast 5G network that will especially benefit rural communities, and low-cost mobile plans,” said Chief Deputy Attorney General Natalie Hanlon Leh. “Our announcement today ensures Coloradans will benefit from Dish’s success as a nationwide wireless competitor.”

“This will strengthen competition for millions of current and future customers across America while bringing to life the nation’s first virtualized standalone 5G broadband network,” said Ergen.

“We are proud to announce that our new wireless headquarters will be located in Littleton. This will bring new jobs and new opportunity to the state, and Colorado will be one of the first ten states in which we will build our 5G network,” he emphasized.