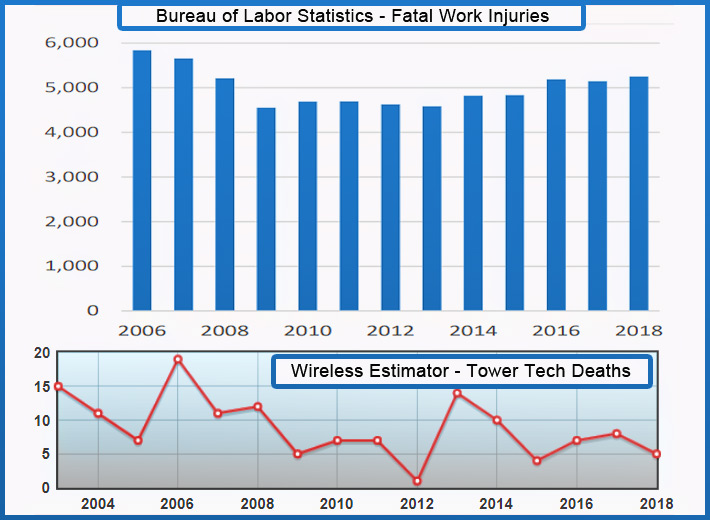 The BLS noted a decline in fatal falls, the lowest since 2014 for general industry workers, but not tower techs

The Bureau of Labor Statistics’ (BLS) has released its Census of Fatal Occupational Injuries Report for 2018, and OSHA and media have been heralding the marked 14% decrease from 2017 of fatal falls to a lower level totaling 615, a five-year low since 2014 when there were 674 deaths.

The wireless construction industry also saw a marked improvement in 2018 with 4 fatalities of workers falling versus 6 in 2017, the same amount of workers that died in 2016 as the result of a fall.

Although the BLS may again show a trend in 2019 of lower fall fatalities, the wireless industry’s record will challenge OSHA’s belief that the 14% decline in work-related fatal falls in 2018 was through their enforcement efforts and addressing fall-related hazards.

Some industry observers believe that many deaths occur because the tower technician has not been properly trained or their employer does not enforce or manage their safety program.

In two of the 2019 fatalities reported by Wireless Estimator, it has been alleged by the fathers of the tower techs that their son did not receive any formal training before they began climbing towers.

The BLS report said that transportation incidents remained the most frequent type of fatal event at 2,080, accounting for 40 percent of all work-related fatalities.

Unintentional overdoses due to nonmedical use of drugs or alcohol while at work increased 12 percent from 272 to 305. This is the sixth consecutive annual increase.

Violence and other injuries by persons or animals increased 3 percent in 2018, due to an 11 percent increase in work-related suicides from 275 to 304.

The BLS said fatal injuries to taxi drivers and chauffeurs declined by 24 percent to 47, the lowest total since 2003 when comparable data for the occupation were first available.

It is not known if the reason for the considerable decrease is due to the taxi-driving industry being decimated by Uber and other car service companies that have independent contractors that are not tracked by the BLS.