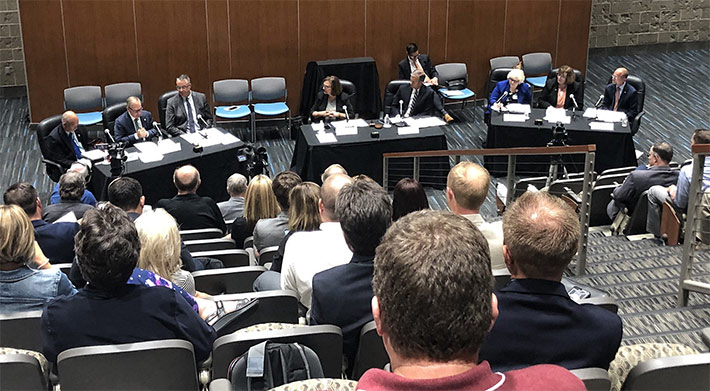 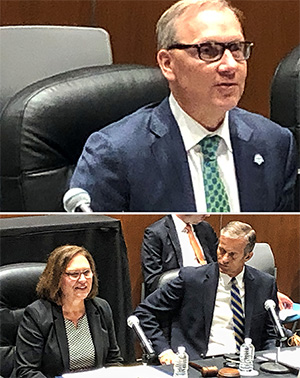 During his remarks, Snyder provided his perspective on the current efforts of the industry to deploy broadband to rural and underserved areas, discussed the powerful economic impact of 5G technology and highlighted the prominent role that wireless infrastructure contractors and the technician workforce play in the efforts to connect America.

As part of his witness testimony (see full testimony below), Snyder also discussed support for H.R. 1848 – The Communications Jobs Training Act of 2019 legislation that has been introduced in the U.S. House of Representatives and encouraged Sen. Thune and his colleagues to introduce a companion version of the bill in the U.S. Senate. The legislation would establish a competitive grant program at the FCC and appropriate $20 million per year for three fiscal years to develop classroom and field-based curriculum and certificate programs at community colleges, technical institutes and military organizations.

“It was an honor to participate at today’s hearing and serve as a voice on behalf of NATE’s 900 member companies who are on the front lines playing a prominent role closing the digital divide and deploying next generation wireless networks,” said Craig Snyder. “I would like to thank Senator Thune for providing this forum today to help shine a spotlight on the wireless infrastructure industry’s opportunities and challenges,” added Snyder.

In addition to Snyder, the other participants who provided testimony at today’s hearing included the following:

INTRODUCTION
Good afternoon. And thank you, Mr. Thune, for inviting me to testify at this hearing. By way of introduction, I am one of the co-founders and the chief executive officer of VIKOR Teleconstruction. (Formerly known as Sioux Falls Tower) We are a 30-year-old firm specializing in the construction of mobile broadband infrastructure. We’ve been headquartered here in Sioux Falls since 1989 with offices throughout the Great Plains and mountain states. In layman’s terms, we build the towers and antenna systems that transmit the signals that talk to cell phones across the country.

RURAL BROADBAND LIKE RURAL ELECTRIC
It’s been my privilege to witness the build-out of wireless broadband services that coincidentally began at the start of my professional career.

I started as a tower technician myself working my way through college. This remarkable buildout has not been unlike the electric grid buildout in this part of the country 70+ years ago. Cellular started slow with one tower serving each city and then spread to small towns and rural corridors. But just like with the rural electric buildout, the last to receive wireless broadband has been the vast wide-open spaces with sparse population.

One of my founding partners, Edwin Stritecky, used to tell me how anxiously his family waited for electricity to be brought to their farm. They had the house wired, appliances purchased, and then they waited for the rural electric cooperative to run the power poles and wires down their country road near Stickney, SD. Can you imagine today if there were people without power to their rural homes. We’d move heaven and earth to get them power. We’re getting there with broadband, but we have a way to go.

Over the past 30 years we have heard many voices expressing sentiments of not wanting towers in their backyards. But like the rural electric customers of yesterday, now we are hearing more and more a different cry from our rural and urban neighbors. “Please in my backyard”. People are hungry for wireless broadband and covet the reliability and speeds they get a flavor of when they travel to places where it is more common. When they hear talk of 5G in the news, many are still waiting for 2 or 3 bars of 3G coverage. Towers are becoming a symbol of these sentiments.

CLOSING THE DIGITAL DIVIDE
Thankfully the partnership of industry and government have begun to make a difference. The “white spaces” are beginning to shrink and the digital divide between the cities and rural areas is closing. But there is a ton to do and no time to waste. Technology is advancing at the speed of thought and the global race to 5G is on. Even while we continue to close the “white spaces” gaps in rural America we are also ramping up our efforts in the cities to roll-out “Fifth Generation Wireless” commonly known as 5G.

5G
5G has enormous technology and economic ramifications for America. Not only does it bring the consumer 1 gigabyte download speeds and 1-3 milliseconds latency, if America wins the 5G wireless race, the economic ramifications and benefits are huge. We reap the harvest of hundreds of billions in investment that will set America up to be the driver to the rest of the world.

Applying the possibilities of 5G are largely yet unknown. When applied to mobile devices and machine-to-machine communications, the opportunities cannot be overstated. We are just now gaining a glimpse of what incredible applications will spring from this technology breakthrough.

One simple example I like to use is autonomous driving cars. The day is not too distant when a Tesla will drop off its owner at work in the morning, work as a self-driving UBER throughout the day, then come and pick her up and drive her home in the evening.

APPLICATION TO COMPANIES LIKE VIKOR
So how does this apply to a company like mine? The ramp-up to fill white spaces with services like AT&T’s FirstNet, and the global race to 5G in the urban areas is pushing demand beyond the supply we have workforce to fill.

The National Association of Tower Erectors commonly referred to as NATE and headquartered right here in South Dakota, has done a remarkable job of raising the bar in safety and standardization of the wireless infrastructure workforce. My voice represents the 900 other member companies like mine. The explosive growth on the horizon will push demand for skilled workers even higher.

By way of example, an entry-level wireless infrastructure technician can earn upwards of $60,000 per year. Skilled workers well beyond this. We have been a long-neglected trade among our electrician, plumbing, mechanic, and other fellow tradesmen in terms of educational opportunities. Whereas there are programs for most trades, there are not for tower technicians. Tower technicians must be trained by the companies that onboard them. Companies like VIKOR. This is a long and expensive process, costing my company around $12,000 in the first 6 months of employment. We need more trade schools like Southeast Tech to establish training programs for tower technicians to fill current and future demand. And to this end, I applaud my friends at Southeast Tech for considering launching a program here in Sioux Falls in the near future.

WHAT WE ARE HOPING FOR
So, what am I and the 900 member companies of NATE hoping for? First off, we commend Commissioner Brendan Carr and the rest of the Federal Communications Commission for being forward-thinking in clearing regulatory hurdles in advance of the 5G build-out.

Whereas the electric utility industry has almost no zoning or federal hurdles involved in placing their elevated steel infrastructure across our cities and rural areas, telecommunications towers have been met with resistance at almost every turn.

The FCC has worked hard under great opposition to help level the playing field. But there is more work to be done. We need help with both regulatory hurdles and workforce development. Presently there are bills in both the house and senate that could help alleviate the burdens on our industry. (S. 2363 and H.R. 3255 – Telecommunications Workforce Development Advisory Council within the FCC. and S. 2430 – Exempting federally funded projects and activities in areas not in MSA’s.)

In particular we could use some help from the Senate with a companion bill to H.R. 1848 – Communications Training Act of 2019, a bipartisan bill sponsored by Representatives Dave Loebsack (D-IA) and Markwayne Mullin (R-OK). This bill would appropriate $20m per year for three fiscal years to develop classroom and field-based curriculum and certificate programs like the one being proposed by Southeast Tech. With this kind of help from Congress, the playing field in the global race to 5G against China and others is substantially equaled.

CONCLUSION
Once again, thank you, Mr. Thune, for inviting me to testify. And thank you for your foresight in calling this hearing and being the singular member of Congress that really understands the importance of the United States winning the global race to 5G.